This exhibit includes a variety of 20th century masks from cultures in Western Coastal and Central Africa, including masks of the Ijo, Igbo, Ibibio, and Yoruba cultures from Nigeria, along with masks of the Kuba culture from Democratic Republic of Congo. Artists of these cultures carved the masks from wood and painted them to depict figures with human-like physical characteristics.

In these five African cultures, masks are the most common form of art. Masqueraders serve a variety of purposes within these societies, such as representing historic cultural figures who are identifiable by their symbols; representing deities; standing as reminders of societal rules; and serving in roles in ceremonies. The different masks are also made and used by more than one culture; Janus Helmet Masks, for example, are made in many forms and styles by different cultures, while their meaning and purpose may be consistent.

An important fact to remember about African masks is that the masks were only one part of the regalia worn by masqueraders, who usually appeared in full body costume. In addition, adornments such as cowrie shells, feathers, beads, and raffia were often attached to masks, creating a much more elaborate, complete work of art.

The Water Spirit Plank Headdress was created by an artist of the Ijo culture in Nigeria, near the Niger River Delta. The headdress would be worn on top of the head, facing upward, because it is meant to imitate the way the Ijo saw these spirits, as floating supine in the water. The Ijo traditionally believe in an entire other world underwater that is populated by water spirits and other water beings.

The top of this mask has two cone-shaped horns, one on each side, that point upward, and in the middle, there is an additional protuberance. When masks have this middle projection, it is for attaching additional adornments for the masquerader’s regalia. While nature spirits are often frightening, for the Ijo people the water spirit likes to cause trouble in a non-threatening way, and it is viewed as more playful than scary. Researched by Katie Kimbrough 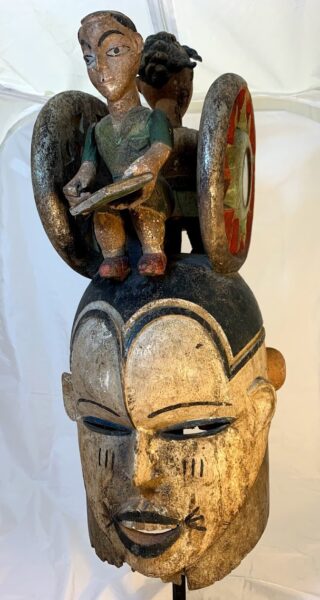 While this Janus Helmet Mask Topped with Modern Male and Female Figures was made by an artist of the Igbo culture, the motif of the Janus is common in Nigeria and the surrounding area. This mask was created for a men’s secret society, and men are the artists who create the mask and who also dance the Janus masks; nevertheless, both men and women are allowed to watch the masquerades.

The Igbo culture is decentralized, and there is great diversity among their art forms. While a Janus mask will always have two faces, there is an endless variety of figures and themes that may form the top of the mask. This Janus mask is topped with two full-body figures, one male and one female, each wearing modern clothing and standing in between two spoked wheels with mirrored decorations. The male figure holds a book, and the female figure stands with its hand in the position of grasping a now-missing object. Researched by Katie Kimbrough

This Bwoom helmet mask was created by an artist of the Kuba culture from Central Africa. Typically, Bwoom masks are covered in beads, cowrie shells, and other adornments, but this mask currently has a simple, smooth surface and no decoration.

Bwoom masks represent multiple characters in Kuba theatrical performances. Originally these masks were used along with masks known as Mashamboy and Ngaady a Mwaash, and they were danced in plays about early Kuba royalty; today, however, this mask may be used to represent an average Kuba person, or it may be used to represent a member of the Twa culture, who historically lived among the kings. Traditionally, the Bwoom and other royal masks are danced during initiations and funerals. Researched by Katie Kimbrough

The Low-Profile Wandering Ghost Mask was created by an artist of the Ibibio culture from Nigeria. Although the adornment traditionally added to these masks is missing now, the holes along the edge of the mask would have held dark-colored raffia.

This mask is the representation of a person who lived an immoral life, as indicated by the dark pigment of the mask. The Ibibio believe that immoral people who have died will go on to wander the earth as evil ghosts, while the good souls travel to the spirit world for the afterlife. Researched by Katie Kimbrough

The Gelede Mask Topped with Six Female Figures was created by an artist of the Yoruba culture of Nigeria. The Gelede are a secret society within the Yoruba culture, which is made up of older men and postmenopausal women. Although both men and women can be a part of the Gelede society, wearing the masks in the masquerades is considered to be the right and responsibility of men.

All Gelede masks consist of the combination of a human-faced helmet mask on the bottom with an elaborate superstructure on the top. While part of the superstructure of this mask is missing, the remaining portion retains six female figures arranged on a round platform. The purpose of the Gelede masquerade is to honor women, past and present, who are referred to collectively as “The Mothers.” When men wear the Gelede mask in masquerade, the masquerade is believed to celebrate and to invoke protection from these ancestral spirits. Researched by Katie Kimbrough