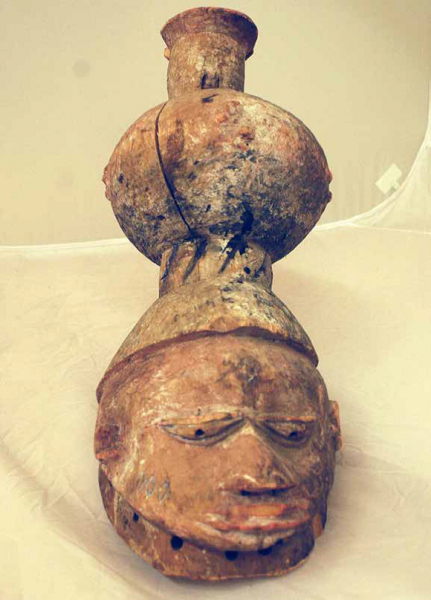 The Gelede maskers do not make their own masks, but instead employ the expertise of professional wood carvers. The carver makes the mask from a single piece of lightweight, freshly cut wood, generally using whatever wood is native to the area. The mask is carved using a series of knives and adzes of varying size and then is usually painted by the carver himself, but he sometimes employs apprentices or other carvers to paint the masks in order to keep production high. Master carvers show their skill through designing large and complex superstructures. While the superstructures of each mask vary widely, the human faces on the masks all have the same general morphology; this mask is a good representation of a traditional Gelede mask, with a face pushed towards the bottom front of the mask, D-shaped eyes, pursed lips that protrude, and small ears close to the bottom of the mask.

Gelede masks are worn by dancers during an event called the Gelede Spectacle, an annual ceremony to honor women in Yoruba culture. The masks and costumes, always worn by men, cover the body head-to-toe in colorful, elaborately patterned cloth. The mask is actually a headdress, as it would adorn the top of the masquerader’s head, and his face would be covered by the cloth or by raffia fibers. In the case of this mask, the face was probably covered by raffia, as there are many holes along the base of the sculpture, and some fibers still remain inside the holes.

The Gelede spectacle takes place during the afternoon on the day after the Efe ceremony, a night-long concert where masqueraders wear male Efe masks and perform satirical dances to entertain and educate the community with storytelling through song. That afternoon, the performers don the much-anticipated female Gelede masks and costumes, again accompanied by music and singing. The masqueraders take their turns performing by seniority, with the youngest members going first; as the veteran members of the Gelede society begin to perform, the crowd becomes more serious and begins to judge the perfection of the choreography with much more scrutiny.

The Gelede dance is not just entertainment for the community, however, but also a richly spiritual, religious event. The Gelede is performed in honor of The Great Mother Ily Nla, to honor and to pacify her great power, as well as to honor the Mothers of the community: the ancestral and deified women of the Yoruba people. Living mothers, especially the elderly, are also honored. There are many myths and songs in Yoruba tradition in which the Mothers have important roles. To the Yoruba, the elderly and ancestral mothers are believed to have immense spiritual powers comparable to that of gods; these powers can be both terrible and a blessing, so the Yoruba honor the mothers, who are appeased so that the use of their powers remains calm, wise, and healing.