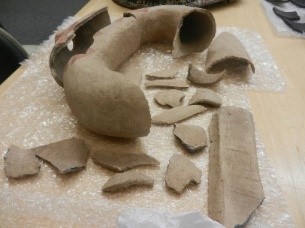 This pottery vessel embodies an irregular ring shape that makes it quite identifiable. Otherwise known as the “doughnut-shaped” vessel, the ring vessel first appeared in the American Southwest region around 500 CE. The specific, vertical style of this ring vessel–that it stands upright, with the spout facing up–did not come into existence until about 900 CE. The lack of fire clouding on the surface eliminates the possibility that this vessel was used as cookware.  The unusual form, meanwhile, hints that this was not used as an ordinary water jug because the relatively small, tubular shape would hold only smaller quantities of liquid, in contrast to the very large jars that were historically used for water storage and use.

The culture with which ring vessels have been associated is traditionally referred to as the “Anasazi” culture of the American Southwest. However, “Anasazi” originated as a term used by the Navajo nation to refer to the ancestors of the Pueblo cultures, and this word variously translates as “enemy ancestors,” “alien ancestors,” and “ancient enemies,” among others. While the term has “Anasazi” been widely used in the past, today it has been replaced by “Hisatsinom,” a term coined by the Pueblo people that means “ancient ones.”  An anthropological term that is also widely accepted for these ancient cultures is “Ancestral Puebloan.”

While condition and size may help to identify how a vessel was used, the most well-accepted understanding of this vessel’s specific purpose comes from oral tradition. The Native peoples of the Santa Clara Pueblo in southwestern New Mexico are believed to be direct descendants of the Hisatsinom, and they have preserved some of their ancient traditions. According to the Santa Clara peoples, oral tradition about the ring vessels tells that, in times of drought, ritual leaders would pray for rain at a designated shrine and perform a ritual. Once the ritual was finished, it is said that rain would pour from the skies, but only into designated ring vessels. A runner was then sent to announce the arrival of rain to the rest of the village. The villagers would then come to the ring vessels with sacred cups to drink the newly collected rain water, and excess ring-vessel water was saved to serve as a strong healing tonic. A successful ring vessel ritual was said to bring an end to the drought.

The markings that adorn this vessel help support this legend-based interpretation of ring-shaped vessels. The half-circle designs painted on the front and back of this vessel are ancient symbols that today are believed to represent clouds, and the upside-down triangles underneath these half-circles may represent rain.  The zigzags that stretch across the middle of the vessel on either side are believed to represent lightning. All together, this vessel’s unusual shape and its meaningful symbolism suggest that this was a special vessel associated with rain and water, and the small size and lack of fire clouding indicate that it was used in ritual.