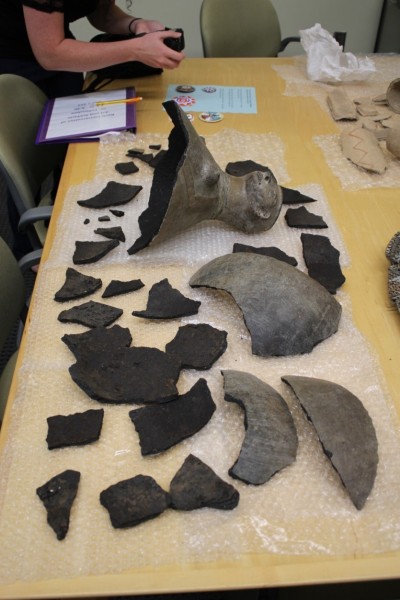 This figural vessel was produced by people of the Mississippian cultures. Flourishing between approximately 800 to 1600 C.E., these cultures lived in what are now the mid-western and eastern regions of the United States. They were known for their complex settlements, architecture and mound-building, their societal structures including ranked chiefdoms, and their figural artforms.

Pottery was a popular artform in Mississippian cultures and was used in daily activities such as food preparation and storage as well as in ceremonial activities. Mississippian pottery included plates, bowls, jars, beakers, and vessels. Some pieces, like this vessel, included sculpted effigies of a human or an animal. As women are the traditional potters in later cultures of this region, it is likely that women were also the potters in Mississippian cultures. Hand-making all of the pottery would have been a significant role in society, as potters were responsible for constructing ceramics for important ceremonies and rituals.

Studies have shown that female figural vessels were frequently buried in the graves of women, both juvenile and adult, possibly to accompany them into the afterlife. Figural vessels may also have been used to honor the mythological beings, to hold libations, and to hold liquids or medicines for consumption.

This figural vessel shows a woman with her arms extending down her sides. At her elbows, her arms bend inward to show that she is holding her belly. Scholars believe that large globular figural vessels with their arms positioned like this Mississippian vessel’s may have been made to represent goddesses or other supernatural beings, such as the deity Earth Mother of later Native American cultures. The Earth Mother is said by contemporary Native Americans to guarantee the survival of families and individuals throughout all seasons, no matter how harsh. The vessel’s round belly may symbolize the Mother holding the Earth and everyone on it.

Because of such images as well as other archaeological evidence of women holding elite status in ancient Native cultures, scholars believe that Mississippian cultures may have been matrilineal, meaning that ancestral descent was determined by tracing the female line and that inheritance was passed down maternally instead of paternally. In any event, women appeared in many Mississippian cosmologies and were seen as creative and fertile, and they therefore were likely to have been highly regarded in Mississippian societies.