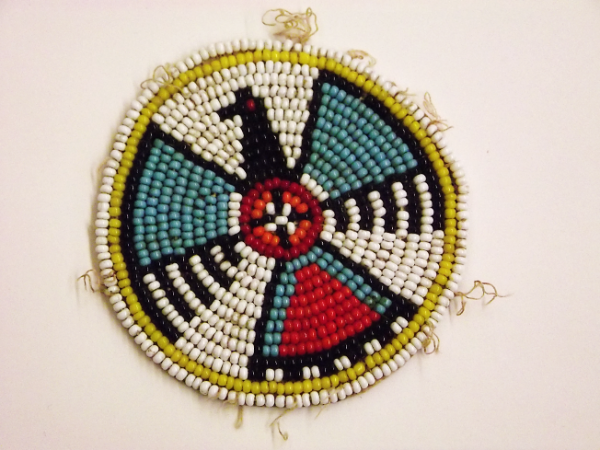 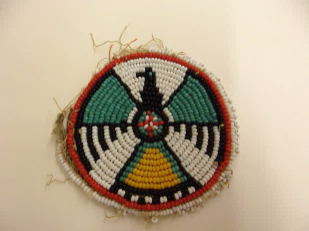 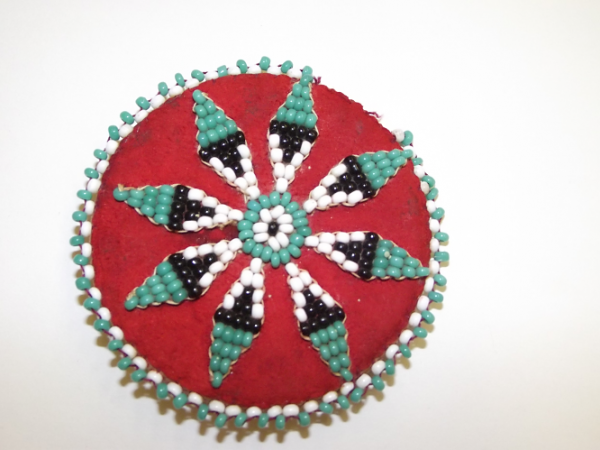 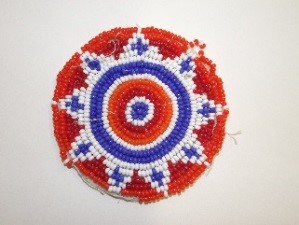 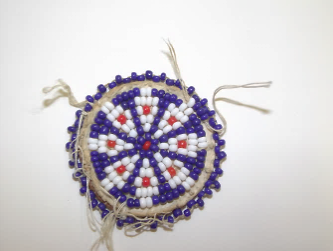 The beaded rosette is a solid-beaded, circular medallion that developed from Native American quillwork that was made in a circular form. These circular designs served as depictions of protective spirits and of Native symbols such as the double whirlwinds and the four directions. Rosettes are attached to shirts, tipis, bonnets, headdresses, moccasins, quivers, and pouches as decoration. Although quillwork was still being produced when beaded rosettes were initiated, beaded rosettes had started replacing quillwork as decoration on war bonnets, women’s dresses, aprons, bustles, neckpieces, and other garments that the Natives produced. Depending on the region, the dominant beadwork theme of rosettes may be geometric designs, floral designs, other organic designs, or even all three together.

For Native Americans, color and symbolism are very significant.  Symbols used in beadwork can tell stories about a person’s ancestry or about the spirits that are important to a family or the culture. Colors can also be used to determine where the beadwork originated. When using color to help identify or narrow down where a rosette design came from, the primary colors on the design are often the most revealing, as some cultures used certain colors more than others; colors also have different meanings for different Native cultures.  Examples from the Lakota culture are that the color black represents the west wind, autumn, and the dream world, while the color red may be interpreted to the sunrise, birth, east wind, spring, and beginnings.  It is also important to note how many repetitions of designs are used in beadwork compositions; there may be repetitions of a design such as a cross or bird tracks in sets of four, seven, or twelve, and these important numbers refer to the cardinal directions, to specific spirits, or to prayers.

The most important identifiers when interpreting rosettes and identifying the culture of a rosette are, in order, to look first at the symbols depicted, second at the colors, third at the number of times a design is repeated, and fourth at whether the design is something that can be described as personal or significant to the group.   However, although color, design, and repetition can be used as helpful identifiers in narrowing down the culture of a rosette, even these indicators are no longer completely reliable. With contemporary cultures intermixing and exchanging ideas, distinguishing the art of one Native culture from another is becoming progressively more difficult.