The southern central Mexican state of Oaxaca is the home to the Zapotec and Mixtec, indigenous cultures whose artisans have both preserved ancient traditions and have developed vibrant new artforms.  Grey plumbate wares have been known since Precolumbian times, and from this ancient tradition developed a prominent form of art known as barro negro, or Oaxacan black pottery. Barro negro is said to have been developed by the gifted potter Rosa Real Mateo de Nieto, better known simply as Doña Rosa.  By making her skilled pottery vessels from the local grey clay, burnishing it with a quartz crystal, and then firing it in a wood-fired kiln, Doña Rosa was able to produce the very dark, beautifully polished wares for which Oaxaca is now famous.  Originally this technique was used to create fine vessels for cooking and food storage, but today Oaxaca artisans make elegantly simple, large, polished vessels as well as elaborately molded, carved, and pierced wares, along with miniatures of more traditional vessels, for a flourishing tourist trade.

Ollas are large, traditional Mesoamerican handmade ceramic vessels that are used for cooking soups and beans over a fire and to make traditional maize-based drinks.  Smooth hearthstones are heated and set in a ring formation to support the rounded bottom of the vessel, which ensures even cooking; when the vessel is used for storage, it is set upright upon a woven ring.  Although this olla is simple, with no carved or molded decoration, its beautifully uniform body and highly polished surface still make this a true work of art. Researched by Emma Schupbach

This vessel is entirely covered by an elaborately carved, pierced design that incorporates traditional Mesoamerican floral and vegetation motifs as well as heart shapes.  The shape of the vessel mimics a traditional flower pot, but the piercings make the vessel unusable for this purpose.  Instead, the vessel is meant to be inverted over a votive candle, to create shadow patterns on the walls and ceiling of a room. Researched by Emma Schupbach

Cazuelas are traditional Mesoamerican tripod casserole baking dishes, although today smaller versions of cazuelas are used to hold salsas.  This tiny vessel is a miniature, and not only does it have a beautifully burnished surface, but also an elegantly scalloped rim.  It is too small even to be used as a salsa dish, but it still has a function – to hold the votive candle underneath a candle cover, like the Black Carved Candle Cover also seen in this exhibit. Researched by Emma Schupbach 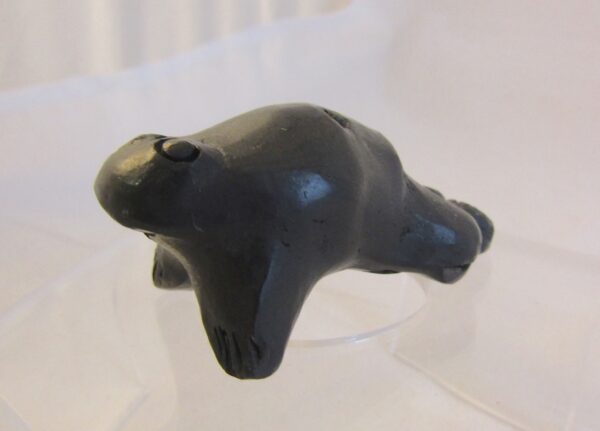 These two frog whistles, or aerophones, are based on traditional Mesoamerican whistles, which were made in the form of people and animals.  Music has long been very important among indigenous cultures, and archaeological excavations reveal that whistles and other musical instruments are found in high-status burials; whistles that make a high, shrieking sound are also believed by scholars to have been used in war.  Whistles like these, which can produce several sounds, are still used today as functional pendant whistles and in traditional dances. Researched by Emma Schupbach