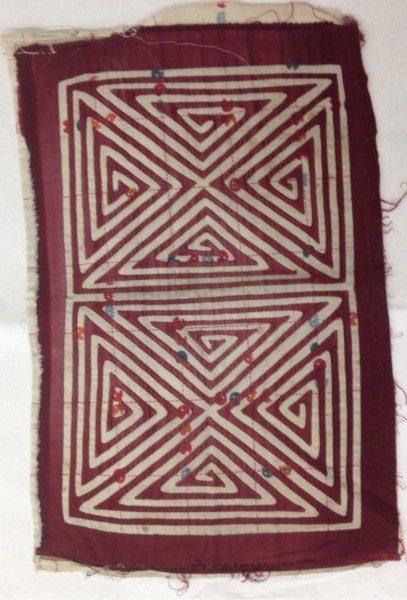 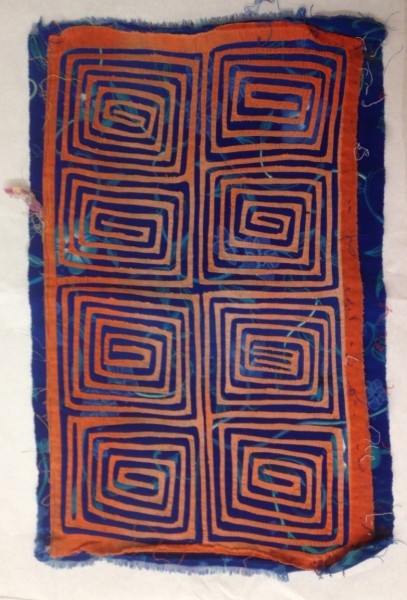 Mola is the Native Kuna word for clothing, and it specifically refers to the traditional, elaborately reverse-appliquéd panels sewn onto the front and back of a Kuna woman’s blouse.  Molas likely developed from traditional geometric body-painting designs, which derive from mythical scenes such as the Kuna creation myth.  The earliest molas were made in response to the insistence of missionaries that Kuna women clothe themselves, and early cloth molas had elaborate geometric designs in red and black, very similar to the local body painting.  Molas today are elaborate creations made in a variety of designs including geometric patterns, animals and plants, scenes from stories and legends, and creative images derived from television and published photographs and illustrations.  The design panels are crafted from cutting through and sewing multiple layers of cloth in many different colors–as vibrant colors symbolize a good and plentiful life to the Kuna—and each panel takes five weeks or more to create.

These two molas are quite old and worn, and the fragments of cloth at the edges indicates that they were cut from blouses actually worn and used by the Kuna, rather than being mola panels that were made specifically for the tourist trade.  Because these molas have two different designs, they likely came from two different blouses.  The molas both use the older, relatively simple geometric designs comprised of two pieces of cloth, one piece of cloth with a printed motifs and one that is solid-colored.  As with traditional molas, the entire panel is filled with the geometric design, with only a narrow border; also like the finest molas, they have very tiny stitches in the same color as the cloth, so they are almost invisible, as well as having lines of very even width and edges and corners that are smooth and rounded.  While the designs reflect the earliest mola designs, geometric designs today have taken on new meaning, also symbolizing traditional Kuna religious temples.