The day had been beautiful; the brothers had even been canoeing to celebrate their parents’ upcoming anniversary. They were grilling on their deck with family and friends when everyone heard a sudden, terrible noise. Sam said it only took a matter of seconds for the sky to change to a sickly yellow color.

“The next thing we knew my dad was screaming at us, ‘Go downstairs!’” Parker said.

The winds hit in the next instant; friends and family members were separated in the dash to take cover.
Sam hid with others in a basement closet and couldn’t even get the door shut before the storm descended.
He saw windows shatter, debris swirl around him and houses across the street crumble.

“My mom didn’t actually make it down to the closet with us. She was upstairs for a second longer than the rest of us, so throughout the whole time stuff was flying around nobody had a clue where she was. … It was absolutely terrifying,” Sam said. Thankfully, she had found refuge in another closet.

When the family exited their hiding places just moments after the storm hit, they saw a new, terrible landscape. Their home’s second floor was open to the sky; rain was pouring in. Their neighborhood was now a debris field with downed trees crisscrossing all the roads.

“You’re in a state of complete chaos — people were yelling, screaming, looking for their loved ones,” Sam said.

They all pitched in. Sam’s first thought was to check on a nearby household with small children (fortunately finding the family had not been home during the storm).

Next, they gathered what they could from the wreckage: They had to find a new place to live for the night, for the week, for who knew how long. They lived with their grandmother for about two months. The family now has a rental home as they rebuild, which could take nine months to a year.

University announced fund in summer; gifts have been numerous, generous

Sam and Parker were among the first recipients of the Emergency Scholarship Fund created by the Missouri State Foundation to assist some of the more than 100 MSU students affected by this disaster. Missouri State wants to make sure paying for college is not one of the problems these students face as they and their loved ones begin to recover.

The fund was announced this past summer to University alumni, employees and friends, and since then about 285 gifts have been received for a total of more than ,000 contributed to the fund. As of January, six students had received awards in different amounts.

“We get a new gift for this fund almost every day,” said Stephanie Lashley, director of donor relations. “It has been a real success and is helping us directly improve the lives of students.” To contribute, donate online.

Money raised will be used for emergencies beyond Joplin storm

Although the fund was inspired by the tornado, it is also intended to assist students facing other unforeseen personal crises including the death of a legal guardian, a natural disaster or a fire. “This fund was established at this time because of the Joplin tornado,” Lashley said, “but it is something that will help students far into the future.”

The Maher brothers said the financial award helped their family during a time of crisis.

“All of the help we got from everybody, including the scholarship … brought tears to my dad’s eyes, which is not very common,” Parker said.

“For complete strangers to donate … to people they don’t even know, that says something about the good in people,” Sam said.

He’s optimistic despite what his family has been through.

“We lost everything, but in reality we lost nothing at all. We have our family; we have our friends — everything that matters.”

The office of student engagement has organized a number of volunteer trips and will be planning more. Alumni are invited to participate or give donations to help cover the costs associated with the trips. For more information, contact Jeremy Schenk or call 417-836-4386. Additional information and ongoing relief efforts are posted on the Joplin Relief blog.

To contribute to the Emergency Scholarship Fund, call 417-836-4143 or donate online through the Missouri State Foundation. 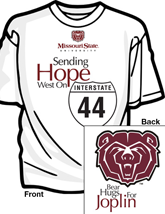 The Missouri State bookstore is selling “Bear Hugs for Joplin” T-shirts for $11.99; proceeds go to relief efforts. The shirts are only available online and may be shipped to any address.

A series of fundraising events hosted by the Missouri State community united Bears and Lions fans.