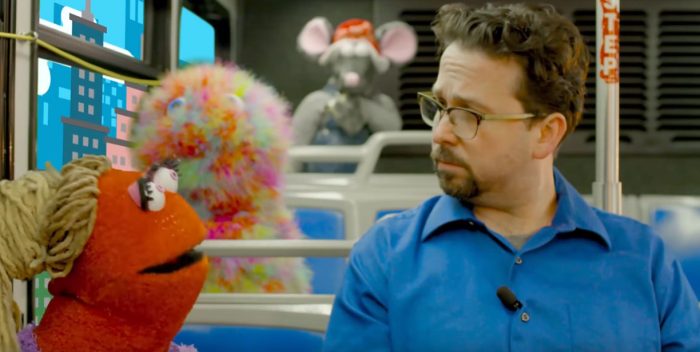 Nathan Shelton, as Mr. Blue, in a video still from Together Nation.

JUST ANNOUNCED — Together Nation, a made-for-TV children’s show by Electronic Arts students Jaime Talamantez and Gates Bartz, won “Best Kids Show” at the NYCTV Festival! This is the second national festival for this senior project. It was also screened at the KID’s FIRST! Film Festival in New Mexico.

Together Nation was designed as a TV pilot where kids and puppets teach adults life lessons about how to behave better.   Produced within their year-long capstone course, ART 498 Senior Project in Electronic Arts (EA), the work was the culminating project of their interdisciplinary, collaborative degree program.  In this senior class, teams of students worked under the supervision of EA faculty, Mark Biggs and Colby Jennings.  Teams can be as few as two students or a crew of dozens!

The Electronic Arts program stresses effective communication, storytelling and collaboration while at the same time fostering creative excellence and technical mastery in animation, sound design, music recording, interactive new media and film making. The program is comprised of students from the departments of music; art and design; and media, journalism and film.