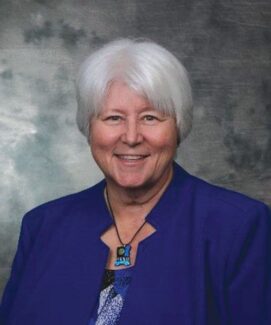 It was a field that allowed her to fulfill her two primary passions: caring for the Earth and travel.

During her nearly 30-year career, Lofstrom explored roles as a geologist, including environmental consulting and teaching at the community college level. She primarily worked as a public servant in local, state and federal government.

Lofstrom found her niche in the California Department of Toxic Substance Control, where she spent the final 16 years of her career. During that time, she rose from a journeyman geologist to technical senior geologist and then to supervisor. She culminated her career with the role of division chief. Her primary responsibility was to protect human health and the environment from the negative impacts of contaminated soil and groundwater.

Lofstrom has given back to Missouri State by serving as a founding member of the geography, geology and planning department’s external advisory board. She has also been a panelist at Public Affairs Conferences and chaired the first-ever GGP alumni reunion.

In retirement, she works with charitable groups to provide mentorship and other support to young adults.

Tell me about your background.

I grew up with a dream of becoming a scientist, but that defied the gender norms of the ’50s and ’60s era America in which I was raised. As neither of my parents graduated high school, education also wasn’t considered a priority. I had to make my own way. I eventually attended then-Southwest Missouri State University as a nontraditional student. I fell in love with geology at the university and declared the major, even though I didn’t know how I would use it as a career. But the Earth Day movement in the ’70s and the formation of the Environmental Protection Agency led me to a career in environmental protection.

What is your favorite Missouri State memory?

Hanging out on the third floor of Temple Hall with my fellow geology majors. Geology is a physical science major, so it required hands-on learning. We studied rock and mineral samples in teams through the afternoon and evening at Temple. I still keep in touch with several people from that group today. In 2012, the GGP department hosted an alumni reunion, which was a great success. Almost 200 alumni came back together in Springfield. Having that sense of community was really something.

For my career, it was environmental protection. I wanted to make a positive difference in the world. Now, since I retired, I want to improve conditions for people and in my community. I mentor young people about the power of education in changing their lives, particularly through my work with the Mary Graham Children’s Foundation.

What’s the biggest challenge you have overcome?

Learning to accept myself and see myself as a successful person. I experienced what I now know as “imposter syndrome” as a student. I felt like I didn’t really belong in college, that I wasn’t as smart as everyone else, even when I did well in my classes. There wasn’t a name for it at the time. My professors helped me overcome that feeling, especially faculty emeriti Drs. Thomas Plymate, Stanley Fagerlin, Thomas Moeglin and James Miller. The personal support I got from my professors gave me the confidence to go to graduate school. It’s one of the reasons I’m so loyal to Missouri State.

What are your most important professional accomplishments?

I became a specialist in the emerging world of vapor intrusion and served as the lead author on one of the Department of Toxic Substance Control’s vapor intrusion guidances. Vapor intrusion is the process in which toxic vapors in contaminated groundwater are drawn up and into homes and buildings. These vapors can cause people to develop cancer or other illnesses over time. Being the lead author of the guidance and providing training to other regulators were important to me. Another important accomplishment was when my partner, Robin Johnson, and I wrote a hiking book called “Geology Hikes of Northern California.” The book explains the geology of nearly 100 hiking trails in a simple but fun format.