Tell us about yourself. Where are you from? What did you major in? Do you have siblings? 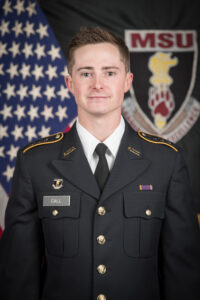 My name is Matthew Call. I am originally from Springfield, Missouri.  I graduated from Glendale High School in 2013 and enrolled at Missouri State in the Fall of that year.  I originally wanted to pursue a Medical route at Missouri State, but found myself fascinated with business after taking a basic business course to complete a general education requirement.  I graduated from Missouri State University in December 2018 with a Bachelor’s in Human Resources Management and a minor in Military Science.  I commissioned as an officer in the U.S. Army on that same day.

I have one Sibling. His name is Josh Call.  He is currently enrolled at Missouri State as a Chemistry Major.  He aspires to be a Pharmacist and is applying to different Pharmacy programs, to include Missouri State.

When did you join the Army ROTC at Missouri State and Why? What are the benefits of being an Army Officer?

Early in my College career I struggled with grades and leadership ability. I felt I did not have the discipline, study habits, personal skills, or charisma I would need to become a leader and manager in the business world.  Recognizing my flaws was a pivotal point in my life which ultimately lead me to the front door of the ROTC department at the end of my Sophomore year.  My Junior year was tough, but also extremely developmental.  I had to completely reinvent my study habits, while learning new Army skills and how to apply them. I had to learn to take charge and how to effectively convey information to groups of people, and lead by example.

The Army and ROTC department helped me become the person that I wanted to be and continued to push me to be my best every day. There is never a shortage of challenges and problems that need to be solved and being the forefront leader in these day-to-day challenges has become my passion.  Being able to lead and develop cohesive teams while taking on some of the most dangerous and challenging tasks in the world is one of the greatest benefits of being an Army Officer.

In your time in the ROTC at MSU, what are the top three lessons you learned?

Taking responsibility for everything you do, good or bad, will get you much further than pinning blame and responsibility on others. Set the conditions for what you can control and go after your end results with audacity.

Don’t be afraid to make mistakes. Failure is the fire that forges success.  You are never out of the fight.

Be a transformational leader. Invest time in the people around you.  You may be able to get to the finals with one leader and a team, but champions are woven from a team of leaders who can work together to create something unique.

You graduated in December 2018 as a 2nd LT. Tell us about the training you have gone through since you graduated.

After Commissioning all 2nd Lieutenants go to a follow-on Basic Officer Leaders Course (BOLC). At this course you learn the technical skills and tactical proficiencies you will use day-to-day as an Officer.  This course is dependent upon what job you get.  I was sent to Logistics BOLC in Fort Lee, Virginia.   Officers can also apply for specialty schools like Airborne, Air Assault, Pathfinder, and Ranger Leaders Course while at BOLC.  I have already attended Airborne school and when I get to my first duty station I hope to get the opportunity to attend Ranger school.

I understand you are going to your first duty station in a few weeks. Where is that and what will you be doing there? On June 12th I will be going to the 173rd Brigade Combat Team stationed in Vicenza, Italy, which is awesome, to support the Maneuver units as they conduct Airborne operations. I am excited to live in Italy and look forward to exploring Europe.

Why should a student consider joining the ROTC?

The lessons learned from the ROTC program will give you the knowledge, skills, and abilities to be a better leader, manager, and person.

What advice would your family give to a family member that’s student is considering the ROTC?

Ask questions and get to know what the ROTC program offers. Many of the classes do not require a military commitment to try it out.