Carmelita Jeter was named the “Fastest Woman Alive” in 2009, plus she is a three-time Olympic medalist. After breaking world records and winning medals, Carmelita has become a role model, influencer, ambassador for the Susan G. Komen California Circle of Promise Initiative designed to promote breast cancer awareness among African American women, and so much more. 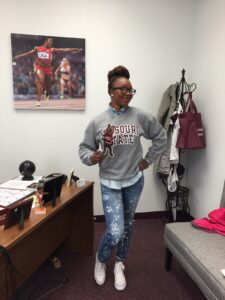 Carmelita accepted the position as Associate Head Coach for the Missouri State University’s Women’s Track and Field team in 2018. She’s now known as Coach Jet! While juggling other commitments, she has also decided to earn her master’s degree here at Missouri State, having just completed her first semester.

According to Coach Jet, she has had an amazing year on campus from speaking at conferences and new student convocation to encouraging members of the Track and Field team to study hard which led to an overall average GPA of 3.5 for team. She has also created strong relationships with students, faculty, and staff. While interviewing Coach Jet, I had the pleasure of asking her to share one piece of advice for our students. Her advice was “while in college make memories and create new experiences.” Coach Jet is aware that college is a place for learning, but it is also a place for growing and making the next four years memorable.

If you would like to hear more from Coach Jet and be very inspired, she will be speaking on February 4th at 7pm in the Plaster Student Union Theater for the SAC’s Last Lecture Event! You don’t want to miss this opportunity to hear from one of the greatest athletes of our time.