Some play March Madness with basketball teams. Others play it with mammals. Dr. Sean Maher and Emily Beasley recently presented posters at the American Society of Mammalogists (ASM) to discuss mammals in and out of the bracket.

Maher, assistant professor of biology, is the chair of the committee that handles ASM’s social media. ASM partnered with March Mammal Madness (MMM) to bring science awareness and fun to the community through Twitter. “I was excited when the MMM offered the society an opportunity to contribute,” Maher said.

Each year, the MMM organizing committee creates bracket of mammals (and occasionally non-mammals) that fight it out for supremacy. Battles are decided based upon species-specific traits, which inform a probability of victory and a random number generator. Battles are narrated on Twitter (#MMM2017), with natural history information and other science-based information presented throughout the fight. The final round of 2017 was a hard-won battle between a honey badger and a short-faced bear. The short-faced bear proved victorious. Other contenders included Pegasus, a giraffe, a spider monkey and a hog deer. 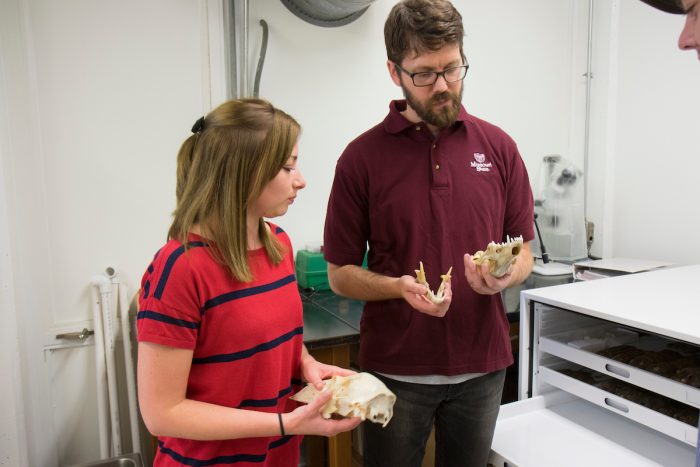 ASM provides images of the combatants from their Mammal Image Library, or other sources when necessary. In past events, ASM also has provided additional natural history information about the loser of the round. The poster described how MMM works and the scientific out-reach opportunities the tournament presents, particularly in classrooms.

Beasley submitted her abstract to ASM and was granted a travel award to attend the meeting. She also received funding from the Graduate College. Her abstract was based on the poster, “Island biogeography of small mammals in Ozark glades while accounting for imperfect detection.”

Using a mathematical model, Beasley examined patterns of small mammals in Ozark glades, like deer mice and cotton rats. She also compared ectoparasites such as fleas and mites to the small mammal population and how they coincide.

“Glades are a unique ecosystem that is rarely found outside of the Ozarks, and the natural ‘patchiness’ of the system made it an obvious choice for my thesis,” Beasley said.

“This was my first ASM meeting, and the experience was great. It is a good mid-sized meeting that allows for plenty of networking opportunities while still being small enough to avoid getting lost in the crowd,” Beasley said. This was Maher’s 12th meeting.