Dr. Chris Barnhart, distiguished professor of biology, and his wife Debra traveled this year to visit and work with former Missouri State University students in New Zealand and China.

“It’s one of the best rewards of an academic career,” Barnhart said. “We really felt like we were visiting family,” he added.

“New Zealand is geographically isolated from the rest of the world, and unique plants and animals evolved there,” Barnhart said. “We saw some of these such as flightless kiwi birds, the reptile Sphenodon, or tuatara, and Peripatus, the velvet worm.”

Unfortunately, many of these unique species are threatened by habitat loss. Brown is working to restore the endangered native freshwater mussels of New Zealand. Barnhart was there to help Brown with developing culture methods, one of his specialties.

These wasps threaten a forest ecosystem in which scale insects produce honeydew that sustains native insects and birds. The invasive wasps eat both the honeydew and the insects. 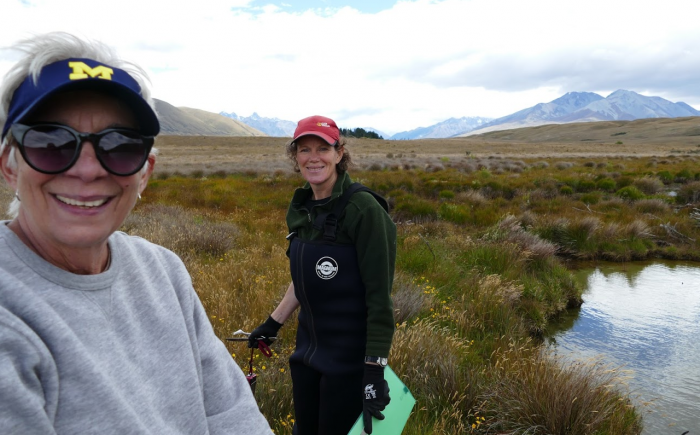 Deb Barnhart and Sue Clearwater, a toxicologist with the NIWA, studying the native mussel.

In July, the Barnharts visited two former students, Drs. Jingjing Miao and Na Liu. Both worked with Barnhart on pre-doctoral research with grants from the China Research Council. They chose MSU because of Barnhart’s work with bivalve toxicology. Both are now professors, with Miao at Ocean University in Qingdao and Liu at Shanxi University in Taiyuan.

Miao and Liu obtained a travel grant for Barnhart to lecture and visit with faculty. Barnhart gave lectures on the conservation significance of freshwater bivalves and on biogeographic connections between China and eastern North America.

Lecturing done, the rest of the trip was ecotourism. The Barnharts travelled with Miao and Liu’s families to parks and natural areas in Yunnan Province.

“Yunnan is the most biologically and culturally diverse region of China,” Barnhart said. “We met Tibetans herding yak at 13,000 feet in meadows of wildflowers.”

Barnhart plans to use experiences and photographs from the trips to develop his biogeography course and public lectures. He reflects happily on visiting former students, saying, “I’m very proud of the work that they are doing, and we hope to return soon.”