As I headed into Temple Hall to interview Martin, I was expecting a typical sit-down interview with him and his nominator, Dr. Katy Frederick-Hudson, microbiology lab coordinator.

Instead, as I arrived, Frederick-Hudson asks if I have on closed toed shoes. When I reply in the affirmative, she ushers me to the lab space.

They can’t do a sit-down interview, she explains. They had an emergency and are making more supplies needed for the day. Three Erlenmeyer flasks are half-filled with brown liquid. Martin watches carefully as he waits for them to boil.

“We do a lot of work here, and he’s good at it, helpful and intuitive,” Frederick-Hudson said.

Martin is a microbiology prep lab technician. He says his favorite part of the job is the people. He also likes the responsibility that goes with the job.

“I like knowing that I help keep the lab open. I know that it could run without me, but I like to think I have some influence on its success,” Martin said.

After Martin was nominated, they had to apply with essay prompts and letters of recommendation. The top three were invited for in-person interviews. 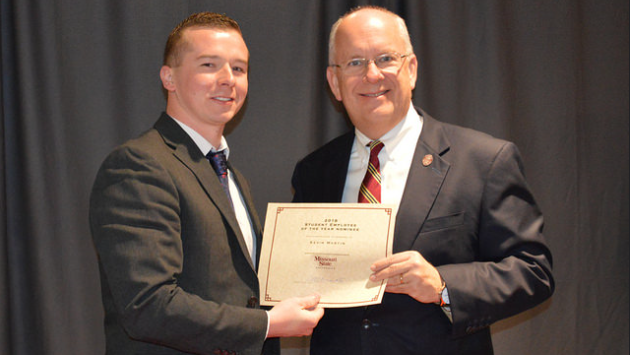 “It was an awesome feeling to receive this award. I was surprised to even be nominated,” said Martin, a veteran headed to medical school after he graduates in May.

Always the scientist, they both wonder how the committee that choses the awardee extrapolates data and quantifies the results with such varying positions and people.

“I thought it was going to be a small little come by, pick up my award, and that’s about it,” Martin added.

In addition to Martin winning Student Employee of the Year, the microbiology lab won the best place to work.

This also qualifies Martin for a regional competition for student employees.

Hannah Whaley, a wildlife biology major who works in the CNAS dean’s office, was a runner up for this award.