Students enrolled in MGT 400 recently travelled to the Atlanta area to participate in an alternative Spring Break service-learning experience.  Part of their service-learning took place at the Jolly Avenue Community Garden, a refugee community garden in the town of Clarkston, the setting for this year’s MSU common reader “Outcast’s United”.  The class was fortunate to also have the opportunity to visit the Martin Luther King, Jr., National Historic Site one day.  Each evening, students broke into small groups to discuss and reflect on the day’s events.  We invite you share in some of the experiences of the trip by reading Emma Donovan’s blog post which she wrote after reflecting on the happenings of that day. 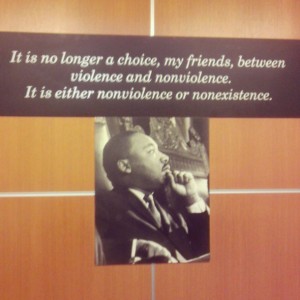 This morning we went to the Martin Luther King, Jr. Museum. It is so eye-opening to really consider the fact that he was assassinated only about fifty years ago. Humanity has come so far in the struggle to end persecution and suffering, but today I was reminded that we still have such a long way to go. Across the world, children are starving, people of all backgrounds are being persecuted and our environment is being destroyed. At the museum, I recall looking into the face of a pleasant looking young man on a television screen and being aghast at the words that were coming out of his mouth – something to the effect of “I wasn’t raised with em (African Americans) and I don’t plan to eat with em.” This seemingly normal man was supporting segregation because of what he was used to and because change made him uncomfortable. But change is inevitable and often uncomfortable. In fact the best change often comes from hard work and going against the grain. I found hope when I looked at pictures of whites sitting alongside blacks in boycotts. But the fact is that the vast majority of whites in this country either supported segregation or were too timid to do anything about it. I hope Martin Luther King’s story is never forgotten so that we can learn not only from the bad, but also from the good that Martin Luther King taught. It takes hard work, dedication and self-sacrifice to make a change. 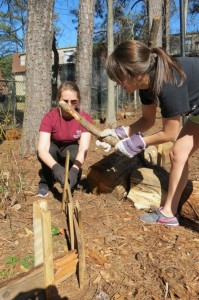 But change is worth it. We look back at the heroes of yesterday and admire them, but oftentimes we forget the injustice that exists today. In the 1950s, good people turned a blind eye to the suffering that existed all around them. Today our generation is turning a blind eye to environmental and global injustice. Perhaps 50 years from now young people will look up to our generation as strong leaders in a fight for injustice that will hopefully be deemed inexcusable in our children’s time.  Or they may look at us as a generation that sat passively when we had so much potential. Our nation and humanity as a hole have come so far but there will always be work to do. As Martin Luther King said:

Through reading the book Outcasts United, we have come face to face with the pain and hardship the refugees have gone through. They faced persecution and uncertainty in their everyday lives, and when they came to America they had to work long days and learn a new language and assimilate to a new culture. There is no telling what damage hardship like this can do to the heart. These people have come here broken and we have the opportunity to heal them through kindness. Humanity has the capacity to radically reduce suffering. We just have to exercise it. This trip has been so meaningful both to us and the refugees. We are able to make their lives a little easier and just as importantly show them compassion and kindness. Through this experience we are exposed to some of the problems and projects happening not just all over the world, but right here in the United States. It is so amazing to see the garden, our class, and the refugee community come together to accomplish a goal. 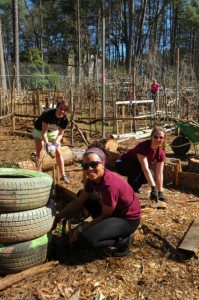 Today I was assigned to a small team. Our assignment for the day? To build a barrier for a berry garden. Our tools? Some sticks, broken boards, and some string we dug out of the trash. The first day I arrived I was amazed at how resourceful the people were. All around me I saw garden plots either ready to be used or already with sprouts growing in them. They were sectioned off with various twigs, sticks, stumps, poles, spare string and anything else available. These supplies were fashioned into the most amazing, elaborate fences. We began our project, mimicking the refugees’ resourcefulness. Before long, we had used some spare boards as a barrier, some sticks and spare wood as support, and a stick as a hammer. I was amazed at how well it turned out and how much people can accomplish with trash.

This just goes to show that one man’s trash is another man’s happiness. And the people were, indeed, happy. The ones who could not communicate well welcomed us with big smiles, and the ones who could communicate readily engaged in conversation. The kids walking past were curious and more than willing to talk. I did not expect such positivity, thankfulness, and happiness from people who had suffered so much. This really put our lives in perspective. If these people had the capacity for joy after so much hardship, then we should have that same capacity for joy every day.

At the end of the day, we were tired and finally ready to leave. We piled into our 15-seater van and began to back out when we realized we were stuck! We all got back out of the van and used our entire group’s problem solving, teamwork and leadership skills to get ourselves out. This included some of the resourcefulness we learned from the refugees in the garden when we began to look around us for tools. In the end some tree bark, shovels, and a lot of pushing got us out after about twenty minutes of collaboration. (Free at last!) Instead of this being a negative experience, I think this brought us closer together. Overall, I have learned so much from the refugees and my classmates about the value of serving and each individual’s ability to make a big difference. I will end with a quote from Dr. Martin Luther King: 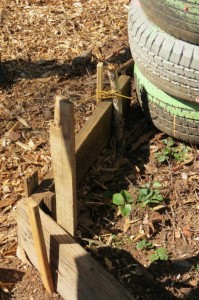