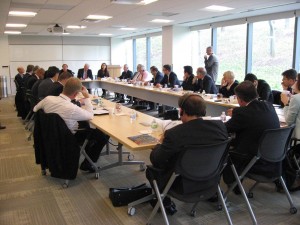 On April 11, 2016 a meeting was held at the Defense and Strategic Studies facilities, in Fairfax, with the 30-member NATO Parliamentary Assembly.  This meeting was requested by the NATO delegation; we were one of only three local WDC sites the NATO delegation visited during this trip.   The NATO group was chaired by Baroness Ramsay of Cartvale (British Labor MP). Dr. Keith Payne chaired the US delegation, which consisted of three DSS professors, Bob Joseph, John Rose, and Keith Payne, and two addition local US experts, Frank Miller and Rebeccah Heinrich.   Simultaneous translation was provided by the NATO delegation’s interpreters.  The NATO delegation included MPs from Britain, France, Germany, Italy, Estonia, Poland, Portugal, Turkey, Norway, Netherlands, Croatia, Greece, and Slovenia. Our subject was “Russia’s Nuclear Strategy and NATO Security.” Members of the US delegation gave testimony for approximately 10 minutes each followed by two hours of Q and A.  Baroness Ramsay said the meeting could have gone on all day given the MPs keen interest and many questions.  She also indicated that they would like to schedule a similar meeting with us in the future. 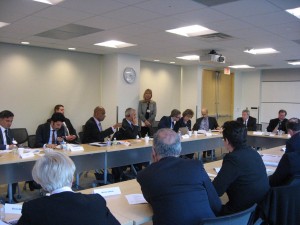