Josh Rodriguez has some advice for adult students seeking success at Missouri State.

“Don’t isolate yourselves just because you are older, have different interests, have kids or are married.

“Engage in your classes, with students, study groups and your professors. Engage in something you disagree with.”

It sounds like Josh, a double major in economics and sociology, has it all figured out. But he’ll admit his path to now has been anything from easy.

“My story is a rather complicated one, with a lot of ups and downs to navigate from a very young age.”

Bringing his ‘can-do spirit’ to Springfield

Josh grew up in Virginia. His family struggled with extreme poverty. As a result, he was exposed to violence and deviant behaviors consistently.

To him, they seemed like the norm. Life was far from stable.

“I remember feeling a low sense of control in life and a lot of pressure to grow up fast.”

He credits his mother for instilling in him what it took to change his environment. Her support and commitment to his well-being gave him confidence, optimism, and a work ethic.

It’s clear that Josh admires his mother, who was a single parent in a tough place. When his self-described “can-do spirit” intersected with a change of space — moving to Springfield — the opportunity for higher education at Missouri State presented itself, and Josh seized it.

“This is where my love of books, knowledge and basketball helped shape me as an individual.”

Josh is a first-generation, older student, who works full-time and is the parent of a 7-year-old daughter. He’s aware of the influence his education has on those around him.

“Whatever luck or blessing that came my way, it is my duty to not just show up each and every day but to put my best foot forward.” 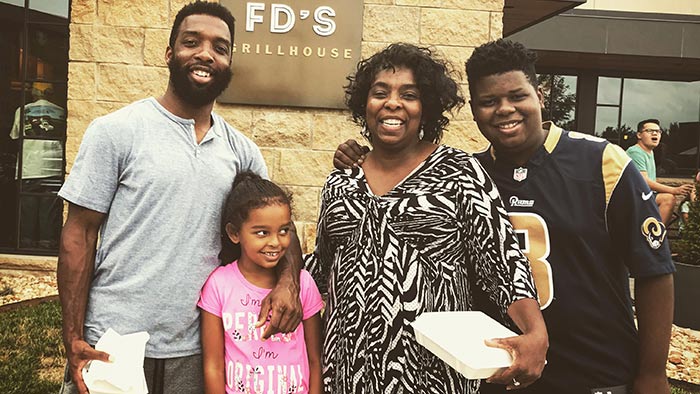 If it wasn’t clear to him before, it was certainly clarified when he attended the 2015 Public Affairs Convocation.

“It was after reading “The Other Wes Moore” and hearing him speak on campus that the reality check that the other ‘Josh Rodriguez’ isn’t living in this opportune space that I was given.”

The book, “The Other Wes Moore”, is the autobiography of Wes Moore. It was Missouri State’s common reader for the 2015-2016 academic year.

Moore’s memoir describes the divergent paths he and another boy, also named Wes Moore, took as a result of subtle changes in their environment. Wes Moore, the author, benefited from living in a stable neighborhood and attending a good school and pursuing higher education through his military career.

“Making it to this point in my life of pursuing further education at MSU is not only my dream, it belongs to my family. Because of this I’m essentially living my proudest moments every day.”

The other Wes Moore, for whom the book is named, grew up a block away, attended a failing school, and is now in prison. A line from the book sums up the differences of the two lives:

Wes Moore was the Public Affairs Convocation speaker in 2015. The impact of his book and his presence on campus is evident for Josh, who sees MSU as the place that made the difference for him. As an economist and sociologist, this is the sort of stuff that stirs him.

“After graduating, I hope to take my fields of study to get involved in community project developments. My heart has always been in seeking out solutions to problems that communities face and not only developing ideas to address these problems but to find innovative and effective solutions at an optimally efficient standard.

“In essence, do something and also do it well for communities.”

In addition to the impact of the Public Affairs speaker, Josh has felt the positive influence of several individuals on campus. One person he points out is his academic advisor, John Hall.

“John Hall hands down has gone above and beyond in assisting me to keep my chaotic life in order. He has often been a backboard for my thoughts and deserves a medal for his ability to work out the complications of a class schedule. It takes a special skill to do.”