The Missouri State University Construction Management program was well represented at The Builders’ Association Scholarship Banquet earlier this month. Among other considerations, scholarships were awarded based on applicants’ academic merit, extracurricular activities, attitude, and interest in a construction industry career. Three Bears received recognition at the event. Read more about their successes in an excerpt of the press release below. The full press release can be found on the Greater Kansas City Chamber of Commerce and the Springfield Chamber of Commerce web sites. 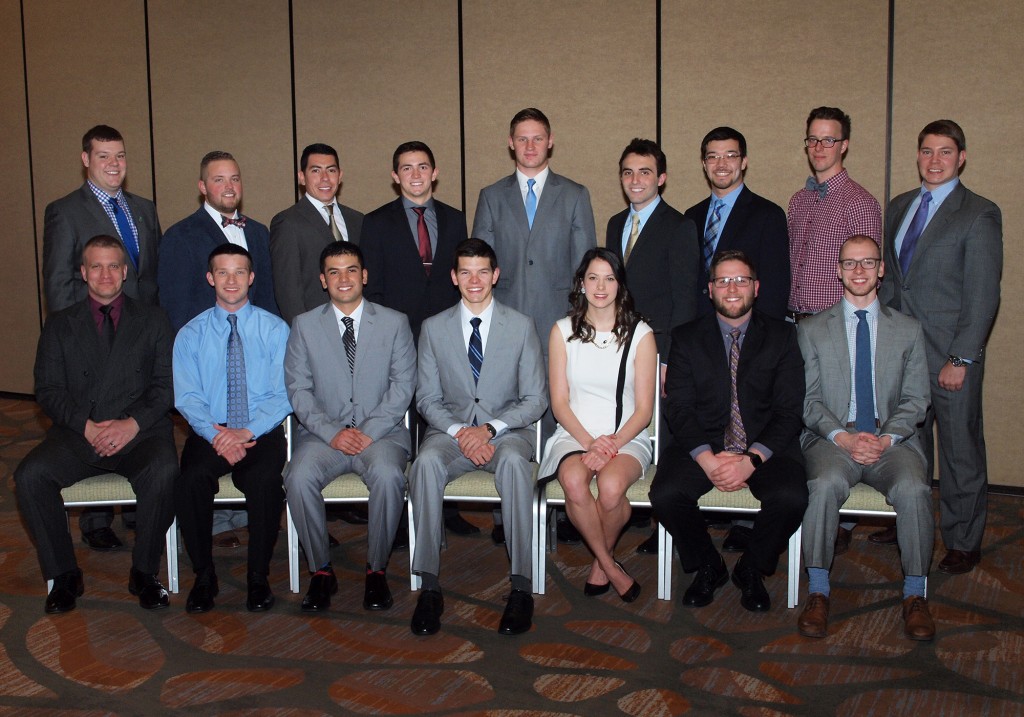 Kansas City, MO – Twenty outstanding students received scholarships at The Builders’ Association’s 128th Anniversary Banquet. The event was held on Friday, February 13, 2015, at The Westin Kansas City at Crown Center. The scholarships were funded by donations to The Builders’ Association Scholarship Foundation, a nonprofit endowment fund established to support, through scholarships, the academic education of individuals who seek careers in the commercial construction industry. The students are:

Sergio Lescano, a junior at MSU, will graduate in May 2016 with a B.S. degree in Construction Management. He grew up in Argentina and moved to the United States following high school. After a year at MSU’s English Language Institute, he began working toward his Construction Management degree. He is a member of Sigma Lambda Chi International Construction Honor Society and the AGC Construction Club. He looks forward to a construction career and to becoming a community leader with an organization such as Habitat for Humanity.

Aaron Parkhurst, a sophomore at MSU, will graduate in May 2017 with a B.S. degree in Construction Management. He is a member of the AGC Construction Club at MSU. During the past two summers, he has hung drywall, framed metal studs, and installed acoustical ceilings for Modern Interiors, Inc. During high school, he was a member of the National Honor Society and Varsity Golf Team, as well as an officer of the Future Farmers of America. He hopes to become a project manager in the commercial construction industry.

Sam Maher, a senior at Missouri State, will receive his B.S. degree in Construction Management in December 2015. He is treasurer of the AGC Construction Club at MSU and Secretary of the Sigma Lambda Chi Construction Honor Society. He was on the Commercial Team that placed first in the ASC Region IV Competition in 2014. At McAuley High School in Joplin, he was captain of the varsity football and basketball teams and president of the student council. He would like to become a project manager with a commercial general contractor.

About The Builders’ Association

Don Greenwell is President of The Builders’ Association, which represents 825 general contractor, subcontractor, supplier, and service provider member companies employing about 25,000 people. With nearly 130 years of service to the commercial construction industry, it also operates training and plan room service centers in Kansas City, Jefferson City and Springfield, as well as its Education & Training Center in North Kansas City. The Builders’ Association’s sister organization, the Kansas City Chapter, AGC, currently represents over 135 firms and is part of the AGC of America, the largest and oldest national construction trade association in the United States. Visit The Builders’ Association online at www.buildersassociation.com.