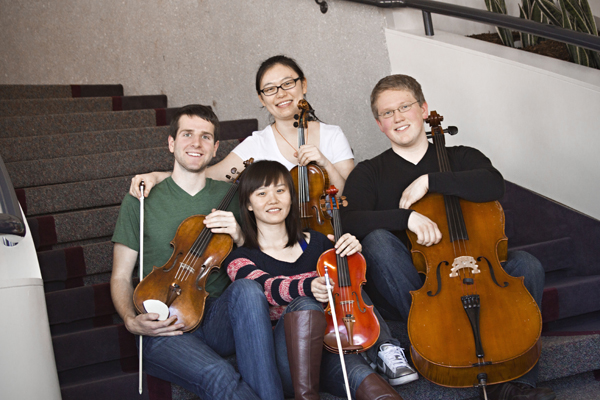 Hardcastle, who studies with Dr. Amy Muchnick, also received first place in the Young Artist String division and will compete as a national finalist in that category. In addition, pianist Jia Hui Wong, a junior piano performance major who studies with Dr. Wei-Han Su, received second place in the Young Artist Piano division. The West Central division competition took place Jan. 13-15 at the University of Colorado in Boulder, Colo., and featured schools from eight states.

“It is significant that our students won their divisions containing eight states in which a number of Division I music schools entered,” Dr. David Hays, music department professor and one of the quartet’s coaches, says. “Our students demonstrated excellent teamwork.”

The White String Quartet, which was featured in the Fall 2011 issue of Expressions, is one of many student ensembles in the music department. It is named after William T. White, late alumnus of the department. The group is coached by the full-time string faculty, including Hays, Muchnick, and Dr. Michael A. Murray.

“It feels surreal to be a national finalist in both the Young Artist and Chamber divisions,” Hardcastle says. “I wouldn’t stand where I am today without the brilliant string faculty here at MSU, along with my friends and family. The White String Quartet and myself are very privileged to get to work alongside such dedicated faculty.” Hardcastle cites Muchnick as an influence on his musical study, and Price says that Murray and cello teacher Elaine Clifton impacted his cello performance.

“To be a national finalist is truly amazing. I am very honored to be a national finalist and represent my state in New York City,” Price adds. “Music permeates all aspects of my life; even though I am a political science/pre-law major at Missouri State University, I always enjoy and am interested in learning and playing music.”

Violinists Yajing Zhang and Xiao Hu, both from the University’s China campus in Qingdao, are in their second year here. Zhang, who has played instruments since childhood, says that advancing to the national finals has given her more confidence in her musical ability.

“My professors and classmates have influenced me a lot,” Zhang says. “Whether studying solo performance or playing in groups with friends and different instruments, I learned the importance of how to listen to myself, others, and the significance of the cooperation.”

Xiao Hu, who cites her dad as her biggest inspiration, adds, “I appreciate the honor very much. I am very proud and it makes me want to work even harder.”