There’s a line in “Ratatouille,” Pixar Animation Studios’ 2007 film about a rat that happens to be a brilliant chef, which goes something like this:

Anyone can cook, but only the fearless can be great.

So it goes in the world of cooking, and also in the world of delectable television shows. It’s even true for “Show Me Chefs,” a cooking competition series developed by Missouri State University media, journalism and film (MJF) faculty and students that’s set to debut on KOZL in Springfield Oct. 3 at 1 p.m. Episodes will available after their initial air dates on the Show-Me Chefs website.

The fearless venture dares all involved to achieve greatness, from the local chefs who will appear and compete, to the students who worked tirelessly behind the scenes. But many cooking shows are already on TV, so what makes this one different?

A sense of community, according to producer and Graduate College student Daan Jansen.

“It hasn’t been done here,” Jansen said. “You’re going to be watching and say, ‘We’ve been to that restaurant. We know that chef.’

The beginning of a delicious journey

The idea for “Show Me Chefs” came about thanks in part to a previous web series, a twist of fate, and an alumnus of the MJF department. 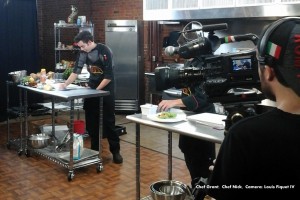 The story begins with “A Little Help,” a MJF web series from 2014. Executive producer Deb Larson had already developed an alliance with Shawn Gott, who majored in electronic media at Missouri State in the 1990’s.

As part of “A Little Help,” the department shot a casino scene at 319 DownTown event center on West Walnut Street in Springfield. Gott owns the location, which was formerly a restaurant called Rasta Grill. The venue still had a cooking station on-site.

During the filming of “A Little Help,” Gott asked Larson if the department would be interested in producing a cooking show.

“The more I got to thinking about it, I thought, ‘It’s totally doable,’” Larson said. “(Gott) is open to it, he has the stuff, he’s willing to spend some money, and he wants us to come back.

“I think Shawn wanted to do it because he’s always been a media guy too. He wanted to get involved, and he also had the capabilities.”

The community gets on-board

One of the first steps required to produce one of these shows is obtaining food to cook, a tricky proposition on a limited budget. The team had some worries about how they could get sponsors to chip in and help, but quickly discovered their concerns were largely unfounded after a trip to the Farmer’s Market in Springfield.

“I don’t think it was a problem at all,” said graduate student producer Alexandria Perez-Diaz, a native of Spain. “In my country, nobody’s going to give you anything 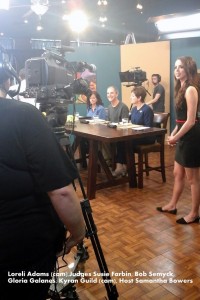 “It was hard to explain the project (to food vendors), but we went to the Farmer’s Market and they were willing to let us try things there. They said, ‘Yes, I can give you produce for your episode.’”

The process of obtaining necessary ingredients only took about 30 minutes, Jansen said.

“We basically had everything we needed,” he said. “I think it’s such a unique project, and everyone loves food. Everyone watches cooking shows. It ended up not being that hard to get community people on-board.”

The stars of the show

The list of competing local chefs is a who’s who of culinary masters. The group includes John Allen from The Aviary, Tony Garcia from Avanzare, Wes Johnson from Metropolitan Farmer and Nick Metz from Victory Trade School, among others.

But you’ll see the chefs on TV thanks to the hard work put in by the students behind the scenes. And there were many – about 40 of them from an Advanced TV Production class who earned course credit for their time.

The educational benefits for the students are many, Larson said, all involving some form of teamwork.

“Collaboration, responsibility, and work ethic,” she said. “It gives them a knowledge base of what all the production units actually do and how valuable every single person is to the process.”

On top of that, a funny thing happened along the way for the students, who noted they bid adieu to worrying about their grades.

“I don’t care if I get an ‘A’ or a ‘B’ or a ‘C’ very much,” Jansen said. I care more that the project is going to be successful. I want to make sure … that I can put it on my resume that I produced a seven-episode show that was successful and got to air on TV.