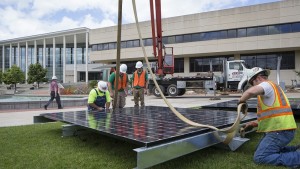 Josh Brown and Brandon Jacobsen, entrepreneurship alums, have always been interested in solar and renewable energy. During a MGT 643 course in the fall of 2012, they turned their interest into a business plan. Through hours of research and development, Brighter Side Energy was born.

Less than two and half years later, the co-owners were back on campus with fellow alum and Brighter Side Energy sales representative, John Krygiel, installing the Solar Stop near Meyer Library.

The Solar Stop is a multi-faceted solar power system.  It provides a protective structure over the bike rack in front of Meyer Library, produces renewable energy for the campus and serves as an educational resource for the MSU campus community. 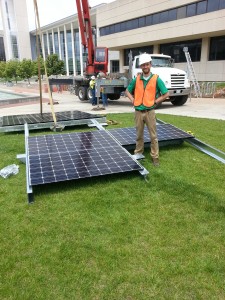 From the beginning, Brighter Side Energy had a goal to install at MSU but the Solar Stop was unexpected. “When the company was first started in 2012, our goal was to install solar energy on the MSU campus within 5 years. Our goal came to fruition much sooner than we originally planned,” states Brown.

For Krygiel, this was personal, “It was a great sense of accomplishment to see a project come to fruition at the university that gave me an education.”

While at MSU, Krygiel was involved in the “Students for a Sustainable Future” organization. Through his involvement he became aware of the proposed Solar Stop project at MSU.  A request of $90,000 was made to the SGA Sustainability Fund by two students Joel Hensley and Max Wagner.  After attending bid meetings, Brighter Side Energy teamed up with a contractor and was awarded the project. 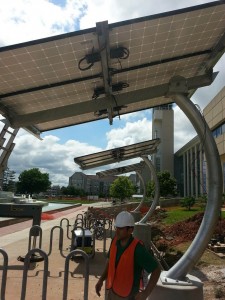 “We hope to work with the University on future solar projects to help encourage students to study sustainability and the use of green options,” states Jacobsen.

Today, Brighter Side Energy operates in Springfield and has recently expanded into the St. Louis market. They can be found online at brightersideenergy.com.