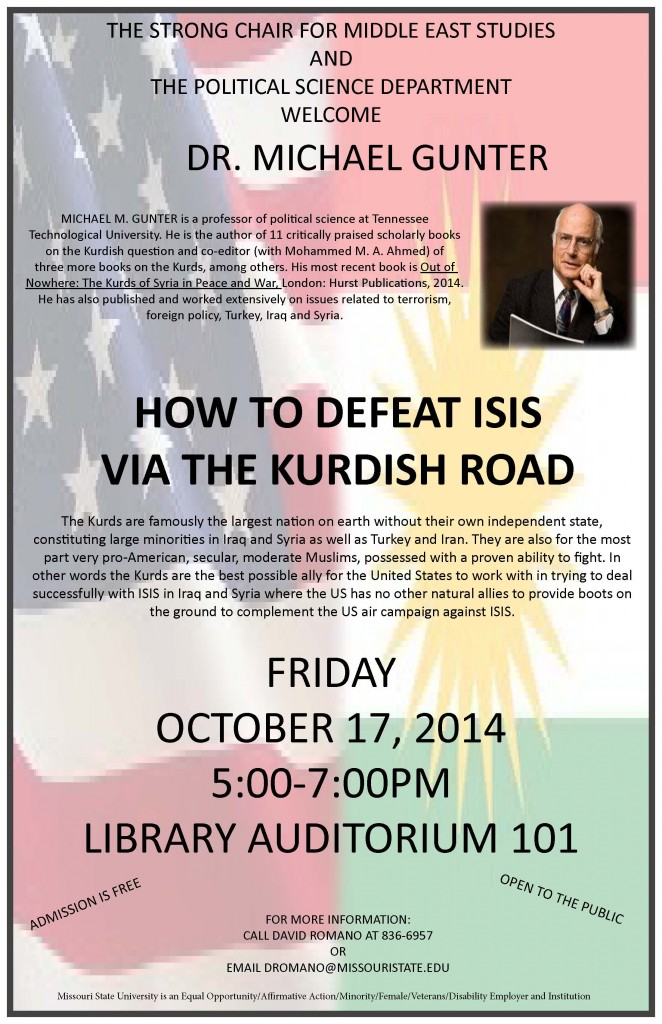 MICHAEL M. GUNTER is a professor of political science at Tennessee
Technological University. He is the author of 11 critically praised scholarly books
on the Kurdish question and co-editor (with Mohammed M. A. Ahmed) of
three more books on the Kurds, among others. His most recent book is Out of
Nowhere: The Kurds of Syria in Peace and War, London: Hurst Publications, 2014.
He has also published and worked extensively on issues related to terrorism,
foreign policy, Turkey, Iraq and Syria.

HOW TO DEFEAT ISIS
VIA THE KURDISH ROAD
The Kurds are famously the largest nation on earth without their own independent state,
constituting large minorities in Iraq and Syria as well as Turkey and Iran. They are also for the most
part very pro-American, secular, moderate Muslims, possessed with a proven ability to fight. In
other words the Kurds are the best possible ally for the United States to work with in trying to deal
successfully with ISIS in Iraq and Syria where the US has no other natural allies to provide boots on
the ground to complement the US air campaign against ISIS.
FRIDAY
OCTOBER 17, 2014
5:00-7:00PM
LIBRARY AUDITORIUM 101
ADMISSION IS FREE
OPEN TO THE PUBLIC