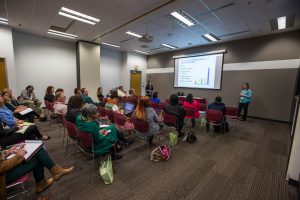 The Division for Diversity and Inclusion’s Shattering the Silences Series is a year-round effort to help educate and give a credence and voice to important topics for the campus and to departments and groups needing a forum to discuss national, regional and local matters.

Join the Missouri State University campus and Springfield community for a facilitated panel discussion about the current trends of immigration and its impacts on global and domestic landscapes. The panel will include members from Springfield as well as an immigration lawyer and government personnel.

Kim and Tiq Milan are a prominent couple within the LGBTQ+ community. As journalists, artists, and activists, their conversations will focus on gender roles, expectations in relationships, gender identity through a transgender and Black lens, and how they love from a radical queer and PoC perspective.

“Cultural sexism in the world is very real when you’ve lived on both sides of the coin.” Tiq Milan

Native/Indigenous Heritage Month: The Right to Pray: The Sun Dance, Factionalism, and Religious Suppression among the Kiowa

This talk will examine the attempt to hold a religious ceremony in a Native American community in Oklahoma and the subsequent legal events that occurred. Dr. Meadows will also address aspects of Native American law, court systems, tribal sovereignty, gender, ethnicity, religion, civil rights, and the legal ramifications of this case.

“Never criticize a man until you’ve walked a mile in his moccasins.” Native American Proverb