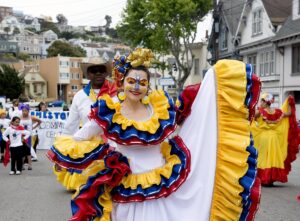 Each year, Americans observe National Hispanic Heritage Month from September 15 to October 15, by celebrating the histories, cultures and contributions of American citizens whose ancestors came from Spain, Mexico, the Caribbean and Central and South America.

The observation started in 1968 as Hispanic Heritage Week under President Lyndon Johnson and was expanded by President Ronald Reagan in 1988 to cover a 30-day period starting on September 15 and ending on October 15. It was enacted into law on August 17, 1988, on the approval of Public Law 100-402.

The day of September 15 is significant because it is the anniversary of independence for Latin American countries Costa Rica, El Salvador, Guatemala, Honduras and Nicaragua. In addition, Mexico and Chile celebrate their independence days on September 16 and September18, respectively.

On September 16, 1810, in the small town of Dolores, in the province of Guanajuato in Mexico, a handful of people were summoned by a parish priest to take up arms against the Spanish colonial government. This began the fight for independence that ended 350 years of Spanish rule. To this day, the church bell that was used to call people to revolt hangs in the National Palace in Mexico City and is rung on the eve of September 16 by the President.

Celebrated by people of Mexican origin throughout the world and in such places in the United States as East Los Angeles, Austin, and El Paso, this is a day when Mexican Americans often hang Mexican flags at their homes. In addition to parades and fairs, the day’s festivities always involve traditional antojitos, most aptly described as a variety of finger foods.

El Día de Independencia is a Mexican holiday and begins at sundown on September 15.

Rosh Hashanah (“Head of the Year”) is the birthday of the universe and the Jewish New Year. It is both a day of prayer and a day of joy when God is proclaimed King of the Universe.

The central observance of Rosh Hashanah is the sounding of the shofar (the ram’s horn) on both days of the holiday and takes place in the synagogue. The blowing of the shofar represents the trumpet at a king’s coronation.

Much of the day is spent in synagogue praying for God to grant all of His creations a sweet new year. Women and girls light candles on each evening of Rosh Hashanah and recite blessings, and festive meals are prepared and eat each night and day.

Rosh Hashanah is a Jewish holy day and begins at sundown on September 18.

Sources: What is Rosh Hashanah?, Chabad.org