National Native American Indian Month celebrates and recognizes the accomplishments of the peoples who were the original inhabitants, explorers and settlers of the United States.

All Saints Day is a celebration honoring all the saints from Christian history. This celebration comes from the belief of a spiritual connection between those in Heaven and on Earth.

In the early years, the Roman Empire persecuted Christians, so the Church set aside a special day to honor those martyrs who died for their faith. Because there were too many to recognize individually, they were combined into one day of recognition.

Samhain is a Gaelic festival marking the end of the harvest season and the beginning of winter. It occurs about halfway between the autumn equinox and the winter solstice.

In ancient times, Samhain was the most important of the four quarterly fire festivals. Hearth fires in the family home where left to burn out while harvest was gathered. Cattle were sacrificed and participants took a flame from the communal bonfire back to relight their hearth fires.

Samhain is considered an important precursor to Halloween, as it is a time when the world of the gods was believed to be made visible to humankind. The gods played many tricks on their mortal worshipers and was time filled with danger, fear and supernatural episodes.

Samhain begins at sundown on October 31. 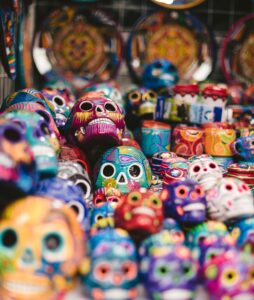 Día de los Muertos is a two-day celebration where it is believed that the passageway between the real world and the spirit world is open so our deceased loved ones can come back to visit us. It began as a mixture of the Aztec festival dedicated to the goddess Mictecacihuatl (“lady of the dead”), with a Catholic influence.

The celebration is not a time for mourning, but rather a time for a reflective and lively event honoring the deceased. Flowers, food, altars and music are all integral parts of the holiday.

Day of the Dead History, DayOfTheDead.holiday

All Souls Day is a day honoring the dead, celebrated in the Catholic Church, the Eastern Orthodox Church and a few other Christian denominations.

Catholics believe the soul of a person who dies can go to one of three places: heaven, hell or purgatory. All Souls Day honors those in purgatory being cleansed of their venial sins and being made pure before entering heaven.

Prayers, almsgiving, lighting candles and attending Mass are some of the traditional ways the day is observed.

The Commemoration of All the Faithful Departed (Roman Catholic Church)

Feast of All Souls

All Souls Day and Why Catholics Celebrate It, Learn Religions