Ridvan is a 12-day festival, celebrated as the most holy festival in the Bahai’ faith. The festival marks the anniversary of the days Bahá’u’lláh spent along the River Tigris in Baghdad. During those twelve days, in a garden he called “Ridvan,” meaning “paradise,” Bahá’u’lláh announced that he was God’s Messenger for a new age. This was also a time when Bahá’u’lláh proclaimed the foundational spiritual principles at the heart of his teachings.

“Ridvan” means paradise and refers to the garden in Baghdad where Bahá’u’lláh proclaimed his mission as the prophet of God.

Although Bahá’ís observe all twelve days, the first, ninth, and twelfth days of the month of Ridvan are holy days on which they refrain from work. 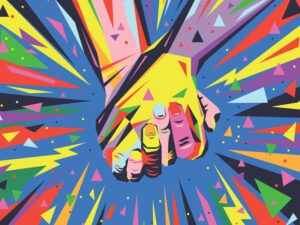 The Day of Silence is the Gay, Lesbian and Straight Education Network’s (GLSEN) annual day of action to protest the bullying and harassment of lesbian, gay, bisexual, and transgender (LGBT) students and their supporters. Students take a day-long vow of silence to symbolically represent the silencing of LGBT students and their supporters. The Day of Silence has been held every year in April since 1996.

On the appointed day, students maintain verbal silence either for the entire day or a portion of the day, such as during the lunch break. During their period of silence, participating students may hand out printed cards explaining the nature of their protest. This may be supplemented by additional texts or images.

National Day of Silence: The Freedom to Speak (Or Not), Lambda Legal

Earth day is observed annually on April 22, marking the anniversary of the birth of the modern environmental movement that first happened in 1970.

After witnessing a massive oil spill in Santa Barbara, California in 1969, and inspired by the energy of a student anti-war movement, Senator Gaylord Nelson wanted to energize an emerging public consciousness about air and water pollution. With Pete McCloskey as his co-chair, a young activist named Denis Hayes was recruited to organize a campus teach-in. To maximize the greatest student participation, April 22 was chosen as it fell between spring break and final exams.

Eventually, there were 85 people across the nation to promote events and the name was changed to Earth Day. Twenty million Americans took to the streets, parks and auditoriums to demonstrate against the impacts of 150 years of industrial development which had left a growing legacy of serious human health impacts.

The first Earth Day in 1970 led to the creation of the United States Environmental Protection Agency and the passage of various environmental laws, such as the Clean Air Act and the Clean Water Act.

Denis Hayes organized another campaign for the planet, and Earth Day went global in 1990 with 200 million people in 141 countries promoting environmental issues. Earth Day 2000 focused on global warming and clean energy, and in 2010 the challenge was to combat climate change cynicism.

The History of Earth Day, EarthDay.org

Orthodox Easter, officially called Pascha in the Orthodox Church, is the most significant and sacred season of the Eastern Christian church’s calendar. This annual holiday includes a series of celebrations commemorating the death and resurrection of Jesus Christ. Spiritual preparations for Easter begin with Great Lent, which begins on Clean Monday and ends on Lazarus Saturday.

Orthodox Easter dates typically differ from Western Christianity Easter dates due to the use of the Julian calendar, as opposed to the Gregorian calendar used by most western countries and Christian denominations. Because of this, Orthodox Easter often occurs at a later date, but the traditions and meanings are nearly identical to those of other denominations – remembrance of the crucifixion and resurrection of Jesus Christ.

The Pascha celebration begins just before midnight on the eve of Pascha Sunday with a special service. The night ends with a feast, marking the end of the 40 day Lenten fasting period.

What is Orthodox Easter?, LearnReligions.com

What is Orthodox Easter?, Christianity.com

What is Pascha All About?, The Good Shepherd Orthodox Church