Dussehra, also known as Vijayadashami (“victory on the tenth day”) is one of the major Hindu festivals celebrated at the end of Navaratri every year. The festival signifies good over evil, commemorating the victory of Lord Rama over the demon Ravana.

Though observed for different reasons and celebrated in a variety of ways across India, celebrations are known to include processions of the statues of Durga, Lakshmi, Saraswati, Ganesha and Kartikeya to a river or ocean and immersing them in the water for dissolution and farewell. In other locations, large effigies of Ravan, symbolizing evil, are burned with fireworks marking evil’s destruction.

The Dussehra festival starts the preparations for Diwali which is celebrated twenty days later. 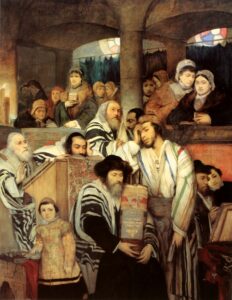 Yom Kippur is considered to be the holiest and most solemn day of the year for many Jews. Known as the “day of repentance” as it inspires introspection, prayer and petitions for forgiveness so that Jews can enter the New Year with a clean slate.

Yom Kippur is a fasting holiday, with the end of the fast being a time for family and friends to reconnect. Some Jews wear white on Yom Kippur to symbolize purity and attend synagogue on this day and the preceding evening.

Mawlid commemorates the birth of the Islamic prophet Muhammad on 12 Rabi’ al-awwal, the twelfth day of the third month in the Islamic calendar. In predominantly Muslim countries, Mawlid al-Nabi is a public holiday.

Many Muslims do not celebrate this holiday, as they feel it puts too much emphasis on the prophet as human and distracts from the true divine source of revelation. On the other hand, many Muslims see this festival as a way of teaching their community about the prophet’s way of life.

Some Muslims celebrate in private homes, while others decorate mosques with lights and hold large festive gatherings.

Birthday of the Prophet: Mawlid al-Nabi, The Pluralism Project at Harvard University