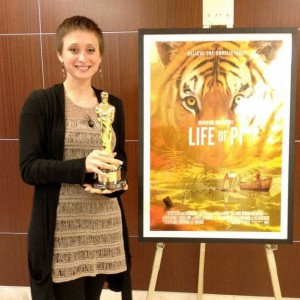 Gloria Cohen Shomo has been very busy in Hollywood since graduating with a degree in Electronic Arts from Missouri State in 2008.

Gloria has worked as the visual effects coordinator on a number of major feature films, including Little Folkers (2010), Moneyball (2011), Alvin and the Chipmunks: Chipwrecked (2011), and Percy Jackson: Sea of Monsters (2013).

Most notably, she served as the digital coordinator on Life of Pi, which won the 2013 Academy Award for Best Achievement in Visual Effects, Best Director, Best Cinematography and Best Original Score.

These events are free and open to the public.  We’d love to have you come meet and hear what Gloria has to share with us about her experiences working in Hollywood.