Quite Tickled Tuesday
Students showcased their comedic talents in an “open mic” in the PSU Lounge right next to Kaldi’s. The event is open to anyone as long as you show up before the show starts and then you can test out those Chemistry one liners you’ve been coming up with in class. Don’t miss out again. Quite Tickled Tuesday happens again April 12, 2011.

Hit the jump to see what else you missed at the PSU last week.

SAC Films presents Mona Lisa Smile
“SAC celebrates Women’s History Month by showcasing Mona Lisa Smile as the weekly film. In 1953, free-spirited UCLA graduate Katherine Watson is hired to teach art history at a prestigious, and very old fashioned, all female college. Katherine wants to teach her students, but more importantly, she wants to show them a world outside the traditions that have been laid out for them. She wants them to challenge the paths that they are all expected to take.”

Greek Week
You may have noticed the colorful banners draping the walls of the PSU this past week. That’s because last week featured Greek Week and it’s plethora of events. Greek students competed in a variety of competitions all week to spread cohesiveness between all the Greek chapters here at Missouri State University. Events included Greek Olympics, God and Goddess Pageant and the always exciting Greek Jam.

Tarang
The Indian Student Association hosted “Tarang 2011” this past Saturday. “The main focus of this event is to raise awareness about Indian culture, traditions and practices among Missouri State’s campus community as well as the surrounding Springfield Community. This is the second consecutive year that the Indian Student Association has come together to put up a show and dinner of this magnitude.” Part of the proceeds from Tarang were donated to a charity in India. 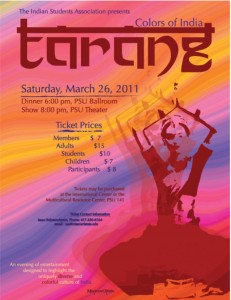 That’s it for this week’s recap of events. Check back on Thursday for preview of what’s coming next week including Zombie Week and comedian Donald Glover from Community!