Five Oral Roberts pitchers teamed up to hold Missouri State to just four hits in a 4-1 decision over the Bears Wednesday evening at J.L. Johnson Stadium. Pepe Gomez limited MSU to a single run on three hits over five innings before the Golden Eagle bullpen slammed the door with four innings of one-hit ball.

April 1st, EARLY DEFICIT TOO MUCH AS BEARS FALL AT ARKANSAS

The Missouri State softball team (20-12) fell behind in the first inning and was unable to rebound in a 9-0 setback against Arkansas (24-14) in Fayetteville on Tuesday.

The Missouri State men’s golf team finished in seventh place out of fifteen schools at the Memphis Intercollegiate with rounds of 306-304-292–902.

On March 18th, six Oklahoma State pitchers combined to hold a struggling Missouri State offense in check Tuesday evening, as the 20th-ranked Cowboys scored three times in the second and never looked back in a 6-0 victory over the Bears at Hammons Field. Led by three scoreless innings from freshman Garrett Williams, OSU held the Bears to three hits in extending MSU’s school-record scoreless drought to 41 innings.

On March 18th, the Missouri State women’s golf team shot records low of 2014 after shooting 320-310-323—953 in the Jackrabbit Invitational hosted by South Dakota State. The 953 is the Bears best score since last October’s Palmetto Intercollegiate, and the fourth place finish tied the Missouri State position at this season’s MSU/Payne Stewart Memorial.

On March 19th, Missouri State (20-13) rallied from an early 13-point deficit to lead by as many as 9 points in the second half. But in the end, it was visiting Murray State (19-11) that executed when it counted most, scoring four decisive points in the final 19.6 seconds to steal a 66-63 win in the opening round of the CollegeInsider.com Postseason Tournament

On March 19th, GRADY SHINES FOR NFL SCOUTS ON PRO DAY! Temperatures were cooler than usual for Missouri State’s fifth annual football Pro Day at Plaster Field on Wednesday (March 19), but the point was abundantly clear by the end of the session — Anthony Grady has NFL potential.

A pair of Missouri State men’s basketball standouts has been honored by the Missouri Valley Conference in the league’s first round of postseason awards announced Tuesday (March 3).  Senior Jarmar Gulley (F, Beaumont, Texas) was named to the All-MVC second team, while freshman Austin Ruder (G, Nixa, Mo.) earned a spot on the MVC All-Freshman Team.

The Missouri State men’s swimming & diving team opens the 2014 MAC Men’s Swimming & Diving Championship Thursday at the University at Buffalo’s Alumni Arena Natatorium shooting for its 19th conference title in program history and first since joining the MAC in the 2009-10 season.

Missouri State scored the go-ahead run on a wild pitch in the top of the 10th inning to post a 3-2, come-from-behind victory over Oral Roberts Tuesday afternoon at J.L. Johnson Stadium. Tate Matheny accounted for three of the Bears’ five hits on the day, while Bryan Young turned in 2 1/3 innings of solid relief to earn his second win of the year.

Freshman pitcher Erin Struemph has been named this week’s Missouri Valley Conference Newcomer of the Week, the league office announced Monday (Feb. 24). She has been simply amazing in the circle for the Bears making her most impressive performances of the season at last weekend’s Blues City Classic. She registered a miniscule 0.45 ERA, going 2-0 and earning her first career save en route to an all-tournament first team selection. 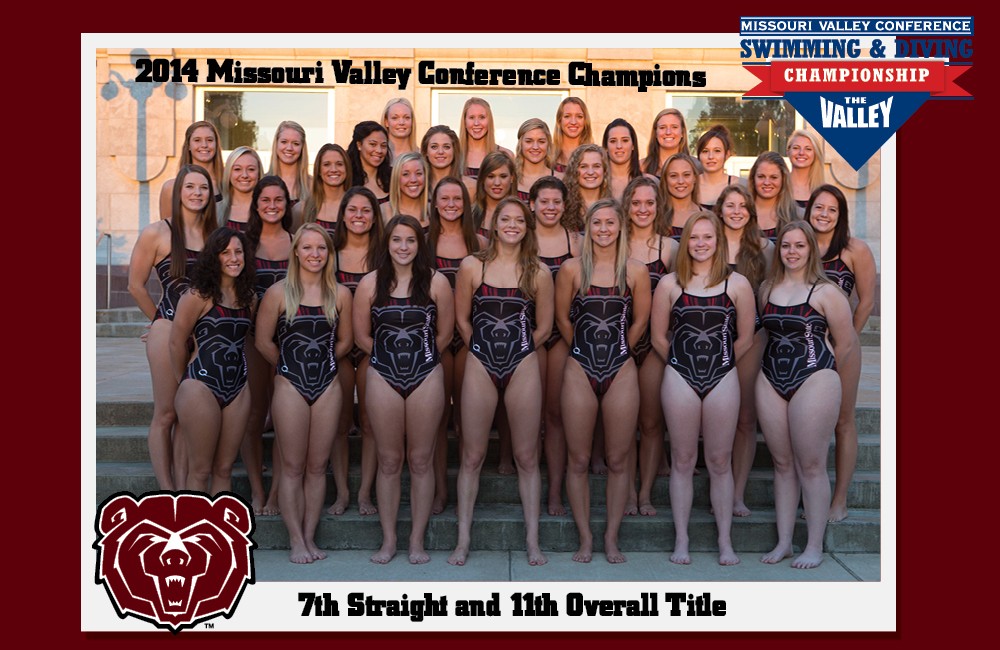 The Missouri State women’s swimming & diving team won its 11th overall and seventh consecutive Missouri Valley Conference championship at Shea Natatorium Saturday. The Bears scored 945.5 points, winning the title over second-place Illinois State by 222 points, the third-largest margin of victory in MSU’s 11 titles. The championship pulls Missouri State within two of Southern Illinois’ Valley-record 13 titles, the last of which the Salukis won in 2007, before the Bears started their own league-record run of consecutive crowns.

Here is the schedule for upcoming games: