ATTENTION: If you are looking for Volunteer hours and a chance to get involved look no further! The Volunteer and Leadership Center are putting on the event Into the Streets!

“Into the Streets is an annual program offering hundreds of Missouri State University students the opportunity to go into the Springfield community and help out at local agencies, non-profits and other places of need.  Through this program, students will learn about a non-profit agency, find out ways to continue to be involved and help serve the community.”

IT’S NOT TOO LATE TO JOIN BEARFIT CLASSES! Classes are held 6 days a week. The cost is $2 per class (exact change) for a member and $3 per class for a non-member (in addition to the daily usage fee). Class options include: Low Impact Aqua Fitness, Cycling, Power Kick, Bear Strength, Power Hour, and TABATA to name a few. Unlimited passes are $35. Class schedules can be picked up in the FRC welcome center.
WELLNESS
SHARP- Self Defense for Women
Campus Recreation & the Dept. of Safety + Transportation
In the Foster Recreation Center Studio A
6:30-9:30PM
Session II:  Held October 8-9, 2012
Register by October 5, 2012
Session III: Held November 5-6, 2012
Register by November 2, 2012
As a student, I understand that this time of the semester is very busy with midterms and tests but once you’re over the first trials, you’ll truly find a place to settle in, and if you’re still looking for opportunities to get involved them come by the PSU and meet tons of people, get connected and start connecting learning to life! Have a wonderful week ahead everyone 🙂

This movie is excellent and a must see for all of you Super Hero Loving movie goers! Come out on either September 26 or 30 at 9 PM in the PSU Theater and enjoy the feature film! Here is a quick preview of the movie as well as a review.

“The Amazing Spider-Man is the story of Peter Parker (Garfield), an outcast high schooler who was abandoned by his parents as a boy, leaving him to be raised by his Uncle Ben (Sheen) and Aunt May (Field). Like most teenagers, Peter is trying to figure out who he is and how he got to be the person he is today. As Peter discovers a mysterious briefcase that belonged to his father, he begins a quest to understand his parents’ disappearance – leading him directly to Oscorp and the lab of Dr. Curt Connors (Ifans), his father’s former partner. As Spider-Man is set on a collision course with Connors’ alter-ego, The Lizard, Peter will make life-altering choices to use his powers and shape his destiny to become a hero.” — (C) Sony 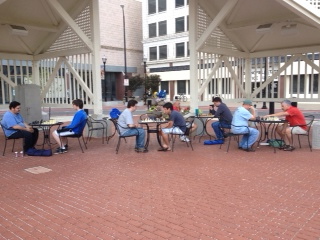 Here’s the story line of “Amreeka”:

“Muna, a single mother in Ramallah, has applied for a visa to the US. When it comes, her son Fadi, an excellent student, convinces her they should go. After an incident at customs begins their exile badly, they join Muna’s sister and family in Illinois. Muna needs a job: although she has two degrees and 15 years’ experience in banking, she settles for work at White Castle, telling the family her job’s at a nearby bank. It’s spring, 2003, and the US invades Iraq. While friends come from unlikely places, Fadi meets prejudice at school. How he’ll respond to it and to American youth culture and how Muna will sort things out with her family are the rest of the story. Tragedy or hope?” – IMDB

This is definitely a great movie to broaden your world view on life. Next here is a trailer of the movie!

Hey everyone here is a schedule for the FIRST FOOTBALL GAME OF THE SEASON!!! Get excited!
Schedule
Friday September 14 – Students are invited to the Bear Paw at 6:00 p.m. for a good ol’ Pep Rally with Coach Allen, the MSU Bears Football Team, Spirit Squads and more. The first 1000 students who attend will receive a FREE neon green t-shirt to wear the night game on September 15. After the Pep Rally, visit Level One Game Center located in the Plaster Student Union and Bowl with a Bear. This event features free bowling, billiards, ping pong, snacks and visits from various student athletes.
Saturday September 15 – Gear up for Game Day on Saturday by visiting the Missouri State Bookstore Fan Stand and head to Bear Fest Village at 4:00 p.m. for free food and fun. If you want to take some extra time before the game, stick around your residence hall room then head to the Bear Paw at 6:00 p.m. to  March with the Missouri State Pride Band. Let the Band  guide you and your fellow students to Bear Fest Village at the First Ever Maroon March. After Bear Fest Village, head over to the game and cheer on your Missouri State Bears. Stick around after the game for a free fireworks show and concert featuring A Rocket to the Moon. Believe me when I say, you don’t want to miss any part of this weekend!
Go Bears!
For you art lovers make sure to come out to Brick City Gallery!
Brick City Gallery, 215 West Mill Street,Springfield, MO
Brick City Gallery is  presenting  a selection of paintings, drawings, and posters by internationally recognized artist Rafal Olbinski. Exhibition continues through October 6th.  “Like” Brick City Gallery on Facebook for all the latest information about Brick City Gallery exhibitions 🙂
Also here is a preview for the movie showing this Wednesday!!!
[youTubeVideo url=”http://www.youtube.com/watch?v=T43InzvBm-k” width=”680″ height=”413″]
Next Page »