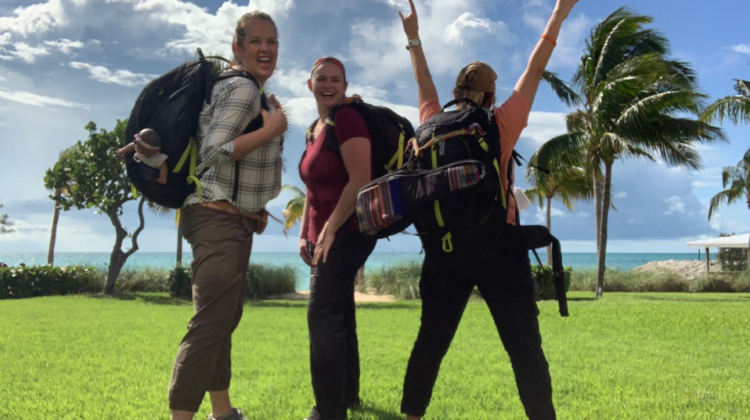 In the wake of a disaster, there’s confusion. There’s fear. There’s grief. It can be nearly impossible for any person to process.

For children, the trauma of a disaster can feel even more confusing and upsetting.

According to NBC News, Hurricane Dorian was the most intense hurricane on record to hit the Bahamas. It is regarded as the worst natural disaster in the country’s history. Dozens of deaths have been reported and hundreds are still missing.

Amid all this chaos and fear, groups of people gather from around the world to help. Cara Smith, child life clinical instructor at Missouri State, was one of those people. Smith went to the Bahamas with the nonprofit organization Child Life Disaster Relief. This organization sends child life specialists like Smith to places affected by disasters.

These specialists integrate into the affected communities and help them find normalcy once again.

“What we do is really just providing the tools to the kids,” Smith said. “We create a safe place for them to play out their experiences. Often times, as adults, our perception of what may be traumatic or what was challenging for them can be different than what a child is experiencing.”

This is why the child life specialists support children through directed playtime. In other words, the specialists are there to provide a familiar way for children to express themselves. It’s a comfortable outlet for the kids to start processing what they experienced.

There were three child life specialists first sent to the Bahamas; Smith was the leader of the group.

Smith and her team were directed to the island of Nassau. Nassau wasn’t severely impacted by the hurricane initially. However, it became the safe haven for those displaced by Hurricane Dorian. This is where Smith’s team began their work.

Their first stop was a gymnasium with over 1,200 people living in it. Around 200 of them were children.

“The first day we walked into that gym and the kids saw we had toys, it was like the masses erupted,” Smith said. “They had nothing, and this was something we could give them.”

The toys were a gateway to creating connections with the kids.

“I think sometimes, when people think of supporting kids in disaster situations, what they’re looking for is a smiley, happy ending,” Smith said. “But that’s not what we really have to do. We have to create space for whatever they’re feeling and tell them it’s okay to scream and cry. We just have to be there.”

Smith recounted some of the stories that most impacted her during her time working with the children affected by Hurricane Dorian.

We had a music therapist with us who was amazing. She did some songwriting with some of the kids. Of the group, several of them were teenage boys. They had a difficult time naming the things that they were feeling. One of the boys said that he thought the hurricane was funny. Clearly, this was his way of not really connecting fully to what he was really feeling.

As the songwriting exercise continued, he started to open up about his best friend that he hasn’t heard from since the hurricane. He doesn’t know if she’s just lost her phone or if she’s dead. He starts to pour his heart out about it. He wrote this song called Depression Dorian.

He talked about depression and how it comes into your life, and it steals all that you have and everyone you love. And it came from this kid who had been sitting there calling the hurricane funny. He was now at this point where he was able to pour his heart out about what it really meant for him.

Smith shared more about her reaction to helping the kids process these experiences. “You have a certain circle of control,” Smith said. “There are these huge needs in these communities, and you want to fix everything. But you can only control this small amount. So, you focus on your own little circle of control and allow that to trickle out to other people.”

She shared another story that impacted her.

I was water-coloring with a girl one day, and I told her she could paint whatever she wanted. She started to draw some dinosaur feet. And she’s painting and enjoying herself. And I’m not an art therapist. I wasn’t there to interpret what she was drawing, but if she wanted to share about it, I was there for that.

When she’s finished her picture, she wrote on the side “love you all” and then at the top she wrote “miss you.” I asked if her “miss you” was for someone special. And she said, “Yeah, it’s for my grandpa.”

And then she said, “He died,” and she just curled up and started crying. A lot of the kids felt like the tears weren’t okay. I don’t know if it was a cultural thing, but I sat there with her and let her cry. Other kids walked up and were asking why she was crying.

I just said, “It’s because she’s got sadness. Sadness has to find its way out.” And then the other kids had this realization that it was okay to cry. Later on after the little girl had kind of moved on, she came up to me and gave me a big hug. She didn’t say anything. Just gave me a really big hug.

It was just so rewarding to be able to give these kids a place to express their emotions, to give them a safe place to cry.