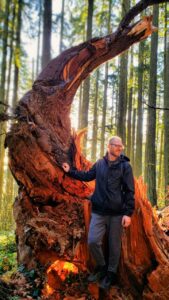 Kurtis Foster, pursuing a PhD in Linguistics at the University of Oregon, teaches and researches in his role as a graduate assistant. His lab research includes experiments to observe how people respond to unfamiliar accents and languages and to determine how people learn languages.  “There’s a really interesting combination of STEM and language in linguistics, so it’s a lot of science,” he explains. “Right now, I’m working on speech perception which entails investigating the ways in which listeners engage with and understand  both the physical and psychological information present in an incoming stream of speech.””

In this work, people are brought into a controlled environment where he and his team can monitor headphone quality, volume levels, and ensure their subjects are focused on the tasks at hand. In a world plagued by a pandemic, research in linguistics has been hindered by people not coming to the lab, Foster says. But “on the other hand, it’s been really interesting too. People from all over the world have been able to come to colloquia series because people [can’t] come physically – they’ve been able to digitally show up… it’s been interesting to hear a lot more perspectives inside the linguistics department. We’ve been able to follow the research of a lot more people. [That’s] been an advantage.”

During his undergraduate studies at Missouri State, Foster focused on the German language, German literature, and language teaching. He minored in linguistics and learned about the field of Teaching English to Speakers of Other Languages (TESOL). “The program helped the two sides of language come together. It gave a scientific approach to language,” he says, which complimented the literature side. He enjoyed both. In 2011, he graduated with his MA in English, with a TESOL emphasis.

Combining literature, languages, and TESOL, he explains, “prepared me to teach English as a second language to international students at various levels.” While working on his MA, Foster taught at Missouri State’s English Language Institute. After graduating, he taught English as an assistant professor for a year at Kyungnam University in Korea, where teachers go for their training.

Of his experiences at Missouri State, Foster says, “The focus on international education and that idea of global citizenship that was growing while I was there [was] really big because it allowed me to interact with a lot of people from different countries and learn about intercultural communication, which led me to being able to live in Korea for a year.”  The university gave Foster the opportunity to work with diverse groups of people. He says interacting with different cultures, accents, and languages – even within one country – is important for teaching language because it provides different perspectives about it. “Teachers and their focus on global citizenship was important to my being able to work in linguistics now.”

“[In TESOL], we did lots of projects where students would pair up with a global studies class and work on projects together. We paired with nursing students [taking] classes to learn about cultural diversity.” He explains, “When you’re practicing medicine, you’re working with people from all these different backgrounds so there are different cultural norms. [Missouri State’s TESOL program] had lots of collaborative learning with people from different majors and [with] students learning English as a second language.”

“It’s likely that there is a career out there for you doing what you want to do even if you haven’t heard of it yet. If you’re passionate about this thing you’re studying, have hope and be optimistic that there is something for you to do with that out there.”

Foster says the greatest obstacle he has encountered for language teachers is the fluctuation in the number of international students enrolled in their programs. Political policies that prevent students from coming to the US cause language programs to see decreased enrollment. He describes the ideal as “having a free and open society where students want to come here – [having] as many students from as many countries as possible who can come here.” By contrast, “when that’s not the case, that leads to [difficulty] keeping all the teachers employed.”

“It’s likely that there is a career out there for you doing what you want to do even if you haven’t heard of it yet. If you’re passionate about this thing you’re studying, have hope and be optimistic that there is something for you to do with that out there.” Foster was not aware that his current work existed until he started taking courses that exposed him to possibilities. “Opportunities arise – especially in the information age we’re in now.”  He indicates that everything is connected. He started with German languages, and while he does not work specifically with German now, he works with languages. “If you’re flexible with how you approach what you’re passionate about then there are a lot of opportunities out there.”

The work Foster and his team are doing is featured in Frontiers In Psychology.