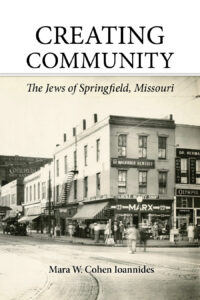 Creating Community: The Jews of Springfield, Missouri by Dr. Mara W. Cohen Ioannides will release at a special book launching event held by the Greene County Historical Society Press on Sunday, October 17, at 3 pm. The author will present a lecture on the history of antisemitism in the city of Springfield, where the event will be held, at the historic Fox Theatre.

Dr. Cohen Ioannides has studied Jewish history for more than 20 years. She edited the first published history of Jews in the Ozarks, Documenting Jews of the Ozarks, which appeared in a special edition of OzarksWatch magazine in 1999.

Springfield locals “tend to think that this was and is a Christian town and an ‘American’ one.” Dr. Cohen Ioannides says. “Springfield is a multi-ethnic, multi-religious community and always has been.” In the 1860s and 1870s when Springfield was growing, German immigrants included Jews and Christians. Jews have been a part of the local history since then, she explains, with a great impact on the community, and deserve to be recognized and studied.

“This [history] is very important for us to remember,” Dr. Cohen Ioannides says. “The Jewish population is so small in the area – less than one percent – that I don’t think anyone, including the Jews, thought the history was important.”

During her research, Dr. Cohen Ioannides found records dating back to the turn of the last century, which included city directories, census records, the oral histories collected by Dr. Marc Cooper, and years of board minutes and sisterhood minutes the local synagogue has stored in the Ozarks Jewish Archive in Missouri State University’s Meyer Library Special Collections. She says, “If you know people’s names, then [you can see that] they appear in other histories and the newspapers.” Finding out what these people did and where they lived is easier than learning their ethnic and religious affiliations. She managed to locate some of these people’s descendants, a few of whom are Springfield residents.

The most surprising find in her research throughout the years has been “the general goodwill of the local community in accepting Jews as part of the community.” She says, “Antisemitism is minimal.” 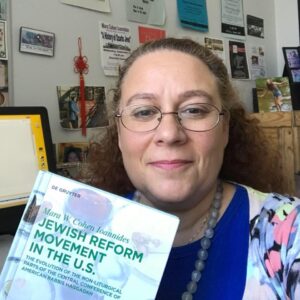 Until recently, scholarly works in history and literature have focused on the East and West Coasts but not the Midwest. A recent resurgence has been influenced by the works of Jon Lauck and others, such as Kathy Borkowski, who founded the Midwestern History Association (MHA) in 2014.  Dr. Cohen Ioannides urged the MHA to include Jewish communities in this history and was invited to write a chapter about how Jews defined the Midwest for the award-winning book The Interior Borderlands, edited by Lauck.

Jewish historical societies in many states publish the histories of their communities.  Creating Community is one of many books about Jewish histories in Missouri. Dr. Cohen Ioannides felt it was important to include a book about Jews in the third-largest city in the state.  “In 1997, Walter Ehrlich published a two-volume set called Zion in the Valley about the Jews of St. Louis,” she explains. “In 1908, there was a history of the Jews of Kansas City published by the newspaper The Reform Advocate.” With enthusiasm, she adds, “The Ozarks Studies Press is publishing my history of the Jews of Missouri, Jews of Missouri: An ornament to Israel, this year as well.”

Dr. Cohen Ioannides’ third fictional work, a novel about a forgotten Jewish commune outside of Newport, Arkansas, is currently in review with a publisher.