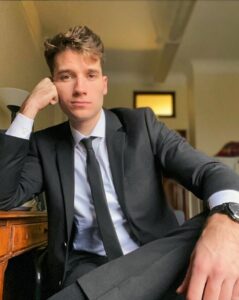 While a student in the English Department, Taylor Supplee dreamed of moving to New York City.  After obtaining the MA in English (2016), Supplee did just that. He became the first Lucie Brock-Broido teaching fellow at Columbia University, where he received his MFA in 2020.

Today, Supplee is a project engineer for the P1 Group, a construction, fabrication, and facility maintenance company in Kansas City. While not in the field of creative writing, Supplee utilizes communication and research skills he learned at Missouri State. “I handle a lot of job estimations,” he explains. When P1 Group receives requests from general contractors, Supplee spends time reviewing 2D drawings and blueprints. He then determines material quantities and expected costs to assemble the pieces, including labor rates, logistics for bringing material to the shop, sending it out to paint or galvanize, and then sending it to the site. Every task he is involved in requires strong communication skills.

Supplee arrived in Kansas City after the pandemic began. As he explains the transition from New York, “I had a . . .  business development marketing job lined up for a design production company in Orlando. I was going to be doing a lot of communications work for them because they were having a hard time integrating text into their artistic materials.” When he flew to Orlando to finalize his employment, he was surprised to find the company closed.  “I’d been taken off their itinerary and no one had told me.”

When the job in Orlando fell through, he still lived in New York City – a city he says was “rapidly closing down.” With opportunities quickly disappearing, he made a difficult decision to “leave New York – which was always my goal destination – and come back” to Kansas City to earn a living. He hopes to return one day and teach again at Columbia.

Aside from COVID-19, the largest obstacle Supplee encountered when entering the creative writing field after leaving Missouri State was finding a job in New York. He explains that the city is one of the most competitive literary markets in the world, and “it felt unnecessarily gatekept,” meaning that people in the field there take it upon themselves to decide who belongs in and who doesn’t.

Networking is key to being successful in the creative writing field.

Many positions don’t pay well relative to the cost of living. He offers advice that networking is key to being successful in the creative writing field. “A lot of these major faces we see in the industry perhaps are not the most talented but most connected.”

Supplee, a poet by training, still spends time working on his craft. He is in the process of publishing a 60-poem manuscript titled Noctuary. “It’s a record of nighttime occurrences. A lot of my work is concerned with death and dying; there are quite a few elegies to Lucie.” Lucie, the woman for whom his fellowship was named, had become a close friend and mentor to him. When she passed away in 2018, he wrote many poems about her death.  Another dear friend died three days before Lucie.   He continues explaining the inspiration for his book, “That semester was particularly difficult, so a lot of the work is marked by elegy, and it’s marked by grief, and a lot the poems take place at night or in a darker atmosphere.”

While he feels it may sound trite, his last piece of advice to students is to follow their passions, “don’t apologize and pay attention to your instincts about who you can trust. Find a confidant who can give you feedback you need. Just be brave. Follow that raw nerve.”