This post was written by Tara Holcomb, undergraduate student majoring in both Gerontology and Psychology at Missouri State University. 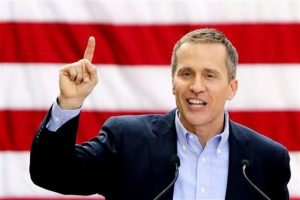 Who is Eric Greitens?

Governor Eric Greitens took office as the 56th Governor of Missouri in January 2017 at the age 42. He and his wife, Sheena, have two young sons. He had no political experience before running for governor, but served as a white house fellow under President George W. Bush.[i]

He was raised in Missouri and attended Parkway North High School in St. Louis, graduating in 1992. He then earned a scholarship and attended Duke University and then Oxford with a Rhoades Scholarship. He joined the military and graduated from Officer Training School in 2001 and trained to become a navy seal. He served four tours of duty in Afghanistan, Iraq, Southeast Asia and Africa.[ii]

He retired from military service, returned home and started a non-profit called The Mission Continues. Its objective is to help veterans who joined post-9/11 come home and make a difference in their community[iii].

Greitens ran as a Republican Candidate and hyped himself as the only “political outsider” running for the gubernatorial election.

In his State of the State Address he spoke on his top priorities for the year, including; cutting governmental red tape, limiting politicians from becoming lobbyists shortly after leaving office, the opioid addiction in Missouri, education and state pensions, making Missouri a job enriched state, term limits, and getting veterans working after returning from war.[iv] He does not formally address aging or any formal legislative action regarding older adults.

He may not have an aging policy but that does not mean that he isn’t taking an indirect position on policy that affects older adults in the state of Missouri.

His main objective from January to May was to balance the state budget. Governor Greitens’ proposed budget restrictions in January included cuts from a multitude of different agencies. After the budget was sent to the house and senate it was passed in May.

The final budget that was signed by Greitens cut budgets and spending from almost every agency except K-12 education and veterans affairs. Even though he does not hold a former aging policy, his signature on the balanced budget did reduce spending in many programs that positively affect older adults.

How do the state budget cuts affect older adults? 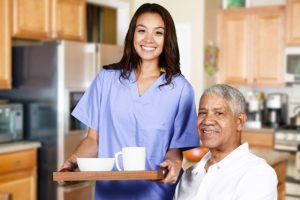 The budget cut in-home and nursing home services for about 8,300 people with disabilities by making the eligibility requirements higher and the services harder to get. The points system that essentially rates sickness was raised from 21 to 24. Lawmakers from across Missouri introduced new legislation to allocate funds from other dedicated sources to cover the expense. [v] But the governor vetoed the bill indicating that he did not want to fund a program with money only to have to cut it again next year, rather he wanted to fix the budget discrepancy permanently. [vi] 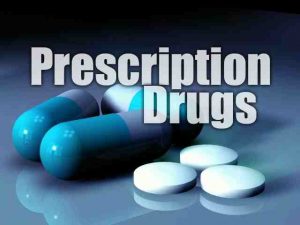 The MORx program helps seniors pay for prescription medication. It works with Medicare Part D and paid up to 50% of the cost of medication incurred by older adults in the state of Missouri. Greitens’ budget cuts affected the program by excluding more than 60,000 Missourians only enrolled in Medicare from qualifying. Now older adults must be enrolled in both Medicare and Medicaid to be eligible for MORx.[vii]

Older adults that do not qualify under the new terms must now find a way to pay out of pocket for the added expense.[viii]

Did the budget do anything to BENEFIT older adults?

With Governor Greitens’ history of military service and his commitment to those who served in the military it is not surprising that he passed expenditures that provided services and support to veterans and veteran’s affairs. He believes that Missouri should be the place for veterans to live and work. [ix]

The budget includes $5.5 million to:

This is an important budget expenditure because according to veteran’s affairs, 37.1% of all veterans are over the age of 65 in the United States.[x]

Missouri lawmakers want to revisit HB3[xi], the bill that Governor Greitens vetoed, in an effort to try to restore funding for home health care and nursing homes. Both Republican and Democrat lawmakers need to decide if they have enough votes to override the governor’s veto.[xii]  They need a 2/3 majority to do so. [xiii]