This post was written by Kaitlyn Long, an undergraduate majoring in both Gerontology and Psychology.

As a young person, I will admit that I am not the most politically involved, and I easily tune out political conversations. Growing up, we always avoided discussing politics, simply because I had a very opinionated grandfather; no one wanted to be responsible for “lighting the fire” under him that would lead to a 30 minute yelling session about what “horrible” thing Obama had done or what the Democrats at the club house had said the night before. I have never really felt inspired to be interested in politics until I met Ilga. 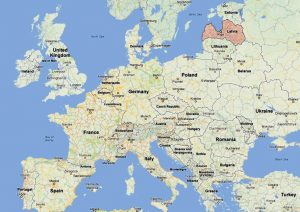 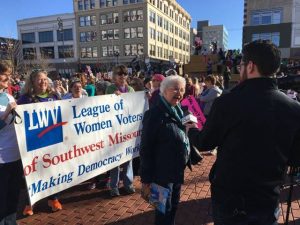 Ilga is an active member of the League of Women Voters1, a nonpartisan group that grew out of the women’s suffrage movement in 1920. In the picture to the left, Ilga is participating in the Women’s March in Springfield, Missouri with the League of Women Voters; she is being interviewed by KOLR-10 TV for the evening news. IIga has always admired this group because of their involvement in the national presidential debates. Being busy with work and a family, she had never really taken the time to study the issues or candidates prior to voting. One particular election, she looked at the ballot and realized how much these candidates were putting themselves out there and into the public eye, and she felt like she was neglecting her duty to know what was going on in the government. The next day she called the League to join.

Yes! These are Ilga approved!

Ilga believes that we live in a country where everyone should have health care insurance. Although the main motive of this act is to make affordable heath insurance available to more people2, Ilga thinks it still needs some tweaking and improvement.

Ilga believes that in order for a democracy to work, we need educated citizens. Our current Secretary of Education, Betsy DeVos3 has not had any time in the classroom and this is a source of concern for Ilga; she feels that funds for education don’t get the priority that they should.

Nah, Ilga isn’t a fan of these.

Recently it has been passed in Missouri that individuals must present a photo ID in order to vote4. As Ilga says, on the surface, this really doesn’t seem like a big issue and it’s assumed that everyone should have a photo ID; the issue at hand is that everyone doesn’t have a photo ID. Although the rationale behind this law is the prevention of “voter fraud,” to Ilga it looks suspiciously like an effort suppress voter participation. 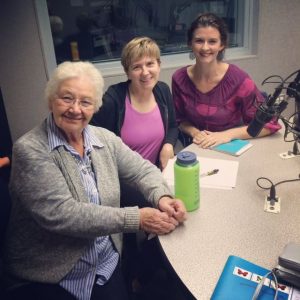 Ilga grew up under dictatorships such as Stalin in the Soviet Union and Hitler in Germany. Under these dictatorships, the news was completely controlled by the government. It is really distressing for Ilga for President Trump to call it “fake news,” seeing as though a free press is a pillar of a democratic society. Learning to work within a democratic society is something Ilga is very passionate about, and she has been a featured speaker on KSMU radio‘s Making Democracy Work segment on multiple occasions. The photo to the right shows her with Lisa Langley and Allison Cash recording a Making Democracy Work segment back in 2014. You can catch her latest segment discussing the Missouri Voter ID Law and National Voter Registration Day here.

If there’s anything I learned from Ilga, I learned that as a young person, it is really important to be politically involved and to not take the freedoms that we have in America for granted.