This post was written by Aubrey Baker, an undergraduate majoring in gerontology.

At the 2015 White House Conference on Aging, former President Obama stated that currently 1/3 of American workers are without a retirement plan at work and Social Security benefits alone are an insufficient source of income for retirees. He delved deeper by saying that, in that past, states had a defined benefit pension where a retired worker would receive a set amount every year after retirement. Obama wanted states to create more ways for workers to save through retirement plans. He asked Tom Perez, from the U.S. Department of Labor, to create a clear path for states to follow to make it happen.1

The high percentage of workers without a retirement plan and Social Security being insufficient in and of itself as savings for retirement served as the rationale behind the development of a plan to pursue additional retirement programs.

myRA as a Program

Before the official launch of myRA by the U.S. Treasury on November 4th 2014,17 Obama talked about his plans for creating this program at the State of the Union Address on January 28th, 2014.16 Obama stated that he wanted to create a program that would give middle-class Americans a break as well. He also expressed his disagreement on taxes that are advantageous to the wealthy. He specifically stated that he would create this program to allow workers access to an automatic savings program on the job.16 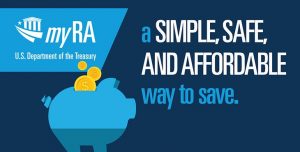 Following the November 4th launching of myRA, it was announced that myRA was a Roth IRA (Individual Retirement Account).6 This program would be a way for Americans to save for retirement by investing their money into an IRA through automatic payroll deductions from their jobs or through payments made from a checking or savings account.7 If a person invested in myRA, they would be guaranteed to never lose money7 because their money would be building in the safety and security of the U.S. Treasury.8 Savings would have a return rate of 2%10, which is less than what you could make in the right stock fund7, but more than most savings plans.8 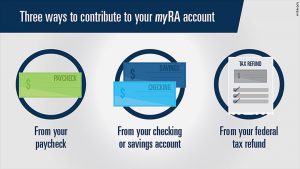 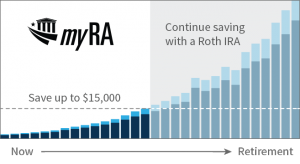 The biggest benefit of myRA was the ability to open an account for free.9 The main purpose of myRA was to serve as a way to open a retirement savings account, as some charge fees to open, for those who were in no position to have to pay fees to open one. The account cap of $15,000 then served as a bridge to other savings accounts.9 Once this amount was reached, the account holder would then have to transfer their money into another Roth IRA of their choosing (to avoid tax liabilities if the funds were received directly by the account holder),11 where they could continue to save. Like other IRA’s, myRA had a limit on the yearly contributions made, being $5,500 per year and $6,500 per year if 50 or older.8

On July 28th, 2017, the Department of the Treasury announced that the myRA account would start to close due to the lack of cost effectiveness and demand by American workers.13

$70 million in taxpayer dollars was invested in this program since 2014; however the total contributed value of myRA (money invested) was only $34 million. 7 It could be argued that the amount of money invested was not worth the expense.

What Now? Are there other options available?

$6 billion in contributions to all IRA’s12 lead to one final point made by the U.S. Department of Treasury. In their announcement, they stated there was more interest in private-sector solutions. Ally Invest, TD Ameritrade, and E*TRADE are just a few of the companies that offer benefits similar to myRA, showing that other options do exist. These companies offer free set-up, no account minimum, and no annual fee.14 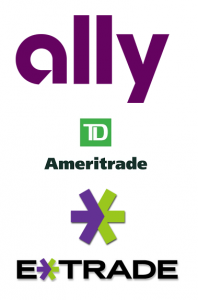