This post was written by Jessica Saunsaucie, an undergraduate majoring in both gerontology and psychology. 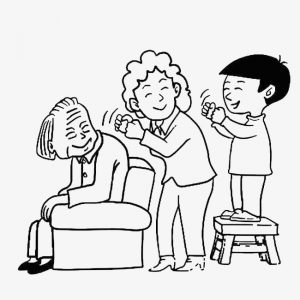 What is Filial Piety?

So, what does this big word mean—maybe you’ve heard of the term filial piety before? The filial piety law was enacted in Korea to promote the traditional values rooted in Confucianism; basically, the government wanted to ensure that adult children would support their aging parents in their time of need.3 The basic principal surrounding the filial piety law is that adult children are responsible for the well-being of their parents as they begin to age.1 Supporting and serving one’s parents is seen as a duty—you could even see it as a sort of trade off.1 Growing up, your parents are the ones who care for you, feed you, and tend to all of your needs. When they become old and you are seen as an adult, it is seen as your responsibility to make sure they are well taken care of.

Korea passed this law in 2007 in an attempt to preserve the traditional filial practices described above.3,6. Not only does Korean government see this as helping the older population of the country, they also see it as benefiting the nation through maintaining this order within the family.1 They believe that a well-functioning family makes for a well-functioning society that can thrive.1

What about the United States?

It may come as a surprise to you, but some states within the U.S. also have similar laws in place, but they are called filial support laws. Because of Social Security, Medicaid, and Medicare providing relief to aging parents, 21 states have repealed their filial support laws as states didn’t see as big of a need for them anymore.4 In the remaining 29 states, few residents know of them, as their enforcement has been spotty.3 For that reason, they have been called the “sleeping giant”. When and if these laws are enforced, they can hold adult children responsible for the costs of long-term care services should a parent be unable to pay.3

Filial support laws vary from state to state, yet all state statutes require the court to find the adult parent is indigent (poor or needy) or unable to provide his or her own support.4,5 Repercussions of failing to support one’s parents vary as well; some states impose criminal sanctions or imprisonment while others find offenders guilty of a Class 2 misdemeanor.4

Differences and similarities between Korea and the US

One of the biggest differences between the West and the East is that filial piety laws are deeply rooted in the culture of Eastern society.1 From a young age, children are taught that it is the most important virtue in regard to an individual, their family, and their nation.1 The value of support and togetherness in one’s family is not overlooked. In Western society, individualism is most important—not saying American’s don’t care about their family—but the ideals surrounding filial piety laws in Korea are not present in U.S. society.1

Korean filial piety laws do not obligate adult children to support their parents in explicit and detailed ways; the main goal is to emphasize the importance of family and an aging population.3 It is deeply rooted in their Confucian and Buddhist heritage, and is an attempt to preserve traditional filial practices.3 In the United States, filial support laws require adult children to financially support their aging parents in regard to the medical costs of long-term care in the event that parents are financially unstable.4

The last difference that is important to note is Korea does not punish their citizens when violating filial piety laws, instead they indirectly enforce the law by implementing policies and programs to help encourage it.3 In the United States, as stated before, violators of the filial support laws could be subject to be charged with sanctions, imprisonment, or misdemeanors.4

As you can see, there are many differences between Korean and American law regarding filial responsibility to one’s aging parents. Both, though, require adult children to support their parents financially—whether it is paying for medical costs associated with long-term care or the costs of living. The main goal for both countries is to provide support to their aging population.