This post was written by Sarah Hollstrom, an undergraduate student majoring in Political Science. 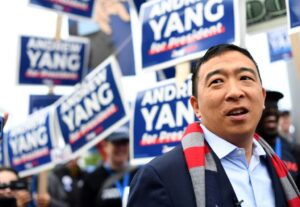 Andrew Yang is a 2020 Democratic presidential candidate whose platform includes several policies that will impact older adults. Yang’s policies are human-centered, which means that they are focused on the well-being of American citizens. If implemented as Yang intends, several of his policies would be beneficial to older adults, resulting in easier transitions to retirement, better quality of life, and better health.1

One of Yang’s major policy proposal’s is the Freedom Dividend. The Freedom Dividend is a stipend of $1,000 that would be granted each month to every American adult over 18 years old. Another term for this stipend is universal basic income. He believes a universal basic income of $12,000 a year would help Americans pay bills, stay healthy, and spend time with family members.1

The implications for older adults are many. First, family members would have additional income to support and care for them if needed. There would also be additional funding to put toward retirement communities or other residential facilities. More money would be able to be put toward retirement. In retirement, older adults would have more money to pursue hobbies and healthy activities which could result in a better quality of life. Yang also concludes that having more citizens able to participate in consumerism would boost the economy.1 With additional funding to help pay for mandatory expenses, there could be leftover money to be used for personal or recreational purposes.1

Yang totals the approximate costs for universal basic income to be 2.8 trillion USD annually. He plans to fund this plan by introducing a 10% Value Added Tax (VAT) that would generate 800 billion USD in revenue. A VAT is a tax on the production of the goods or services that a business produces. The goal of VATs is to make it difficult for large corporations to avoid paying an adequate share of taxes. It is common globally, and Europe already implements a 20% VAT. The VAT would not apply to groceries or clothing.1

Yang’s administration would offer people receiving benefits such as food stamps, disability, and welfare the choice to receive the Freedom Dividend instead. The dividend would be partially funded by the money saved on these programs. Yang argues that the dividend would in part pay for itself as people would be less likely to need health care services, be incarcerated, or face homelessness, saving the U.S. about 100 to 200 billion USD. The spending of the dividend would help the economy grow, create jobs, and generate around 800-900 billion in additional revenue.1

Additionally, Yang also proposes taxes top earners in the country and introducing a carbon emissions fee that will be partly dedicated to funding the Freedom Dividend.1

Critiques to this program are that it is too expensive. Some believe the UBI is a “handout” and that it would discourage people from seeking work. Others say his policy is not clear or detailed enough. Candidates against UBI include former Vice President Joe Biden and Senator Bernie Sanders who proposes a federal jobs guarantee instead. Mayor Pete Buttigieg has expressed minor interest and no outward dissent. Senator Elizabeth Warren is open to the idea, but believes that the U.S. should start with universal child care, investments in education, student-loan forgiveness, and curing Social Security insolvency before we get there.2 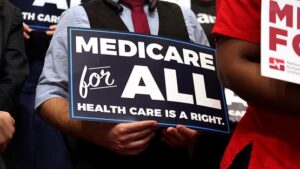 Medicare for All is intended to provide healthcare for every citizen in order to raise the quality of life. A secondary goal is reducing overall healthcare costs by increasing access to preventative care, which would result in healthier Americans.1

How would Medicare for All provide better care? Yang proposes that the price-for-service model, which refers to medical services having a set price be replaced by paying doctors a flat salary. In the Cleveland Clinic, the results of this have been positive for patients. Medication and procedure costs are controlled, unnecessary tests are performed less often, physician turnover is decreased, and doctors are more involved with their patients.1

Through the Medicare for All system, older adults would pay less for medication and services and would receive higher quality of care. That care, according to a model based on the Southcentral Foundation, would also include more holistic support. Specifically, patients are often referred to psychologists during physicals in order to address underlying issues. This could be instrumental in assisting older adults with the transition into the challenges that are more common in older adulthood such as managing chronic illness and adjusting to retirement. It could also help assist older adults with the emotional and psychological effects that come with aging. Preventative care for in early life and throughout adulthood would result in healthier older adults.1

Democratic candidates Sanders and Warren both support Medicare for All, while Buttigieg supports a version of it. Biden does not support Medicare for All. Many Republicans, including President Donald Trump, have opposed this policy proposal. The biggest objection is that the program would be expensive, costing anywhere from 1.38 trillion to 2.8 trillion USD annually. Opponents also worry about the risk of long wait-times and limited options to choose services and doctors.3

Yang’s platform asserts that the government should assist people who are trying to save for retirement. For example, Yang proposes optional retirement amounts that would allow people to decide how much of their income they wanted to be put into these tax-free accounts. This amount could be increased either at regular intervals, or as a person’s income increases.1