National History Day winners to compete at State this weekend

National History Day gives a historically creative outlet for students to become writers, filmmakers, web designers, playwrights, and artists as they research and create their projects. Categories include performances, exhibits, documentaries, websites, and papers. Winners of the Region VII contest have advanced to state level and will be competing this weekend, on April 28th, at University of Missouri in Columbia. They will have a chance to compete with other Missouri students to become delegates to the Kenneth E. Behring National Contest in College Park, Maryland.

On the morning of March 2, 2018, the Plaster Student Union was teeming with 6-12 grade students. 337 students from 15 different middle and high schools in Springfield and surrounding areas presented 197 projects for in the Regional History Day Contest, 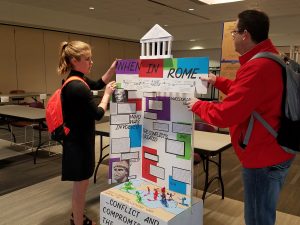 This year’s theme is “Conflict and Compromise” and after working hard for months, the students were ready to share their knowledge. Their projects covered topics including Women’s Suffrage, the Salem Witch Trials, the Cuban Missile Crisis, the Triangle Shirtwaist Fire, and the Civil War. I was greatly impressed with what I saw, but there were a few projects that really stood out.

The Junior Group Performances astounded me. The “Girls United” group from Inman Intermediate presented a short play on the women’s suffrage movement, portraying the female revolutionaries with confidence and poise. Seventh graders form Reed Middle also demonstrated a talent for the dramatic with their presentation on the Salem Witch Trials. These young ladies liked the subject a lot after they learned about it a few years ago.

The last event I saw was Junior Individual Documentaries. “The Forgotten War” documentary depicted the Korean War. This Phelps Gifted Sixth grader was inspired by her Korean aunt to tell a story that many do not get the chance to fully learn about. Another Phelps Gifted student presented the “Olympic boycott of 1980” in Moscow, Russia. This seventh grader was inspired by the recent Winter Olympics as well as his desire to be an Olympic runner. The final documentary I saw was based on the Trail of Tears, which goes through our own backyard here in the Ozarks. This sixth grader from Republic felt that this topic poorly covered by a standard history textbook and wanted to address the problem.

All in all, the hard work and dedication of the students who took part in this wonderful event was inspiring. However, so too was the dedication of their teachers who inspired and drove them to work hard and learn more.