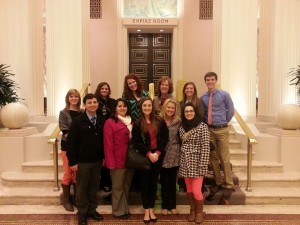 The students also participated in the annual roundtable events at which ESD members from various chapters networked with each other and industry professionals. The breakfast and roundtables, sponsored by Marriott International, were held on Sunday morning in the Jacob Javits Center with over 115 students in attendance from over 12 chapters worldwide.

The students also enjoyed a private tour of the Waldorf Astoria, a five-star New York City hotel on Park Avenue near Broadway and Central Park. This tour was arranged by Stephanie McGirl, ESD Co-President, who met a manager from the Waldorf while working front desk at the Hilton Garden Inn in Springfield. It’s a small world!

The MSU ESD chapter is advised by both Dr. Melissa Dallas and Dr. Dan Crafts.