You are here: Home / Archives for Web Strategy and Development

We’re proud to present the poetry for “Now We Belong,” written by Michael Dennis Browne, for the original work the Chorale will perform Jan. 20 at the inauguration.

“The opportunity,” Browne said, “is to say something as vividly and wholeheartedly as possible on an occasion which draws the scrutiny of the entire world.”

Here are the voices of every creature,
Here are the calls of every heart;
Here is the place of strangers’ welcome,
We who once walked in strangers’ shoes.
Once we were strangers,
We were welcomed,
Now we belong and believe in this land.

Here are the rivers of many echoes,
Here are the leaves of every tree;
Within us live the long horizons,
Winds that stir the sacred stones.
Once we were strangers,
We were welcomed,
Now we belong and believe in this land.

Here are the cities where we have gathered,
Here are the barns where hope is stored;
We are the gleams of every being,
Filled with the dreams that build the day.
Once we were strangers,
We were welcomed,
Now we belong and believe in this land.

Experience how Brown recites the poem

The Chorale’s performance at the 45th presidential inauguration is just days away. Here’s a list of ways you can get involved with this historic moment for these students and the university.

Most of us will not be able to make it to Washington, D.C. for the inauguration, but you can bring the experience directly into your home.

You can also watch live on Twitter. And Missouri State is hosting a watch party at Plaster Student Union for students, employees and alumni.

Give to the endowment fund

The Chorale has set up a crowdfunding opportunity for friends of Missouri State who want to help the group. While they surpassed their $13,500 goal weeks ago, they are now working on a new target: $43,500 to fund future opportunities like this that will help elevate the Chorale and Missouri State to the national and international levels of attention.

You can make a difference. Donate any amount and share the opportunity with your friends and family.

Get help with sharing the event 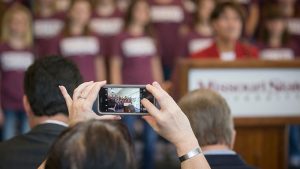 We created a social media kit that features:

Take a look and help us share this incredible opportunity for these students. 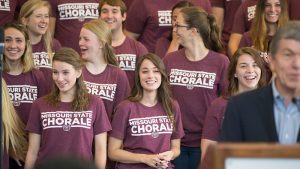 We’ve asked Chorale students to share what they’re experiencing as it happens in Washington. We will retweet many of their posts, which you can find by tracking these hashtags on Twitter:

You can also follow these accounts to get the story:

Go back to October, when it all began. Senator Roy Blunt surprised the Chorale with the news. Their shocked faces confirmed to the Senator that they, in fact, did not know that this incredible opportunity was coming.

The Springfield News-Leader’s Harrison Keegan wrote a story about why director Cameron LaBarr and Chorale members are thrilled to participate in the inauguration.

The Missouri State Chorale will perform during the presidential inauguration on Jan. 20, 2017, and Blake Richter, ’15, will be there to record it. Richter was chosen to accompany the Chorale as videographer and will document the historic event for future Bears. We caught up with him to find out how preparations are going.

What is it like knowing you have this chance for such a cool opportunity? Did you ever think you’d get to go to an inauguration?

I feel so blessed to be able to go on this incredible journey with the Chorale. Being an alum of the group makes it even more special. I’ve been wanting to travel to D.C. for quite a while now since I have never been there, but I never thought I would be going there to sit on the U.S. Capitol Building with the MSU Chorale during the presidential inauguration. It’s so crazy that this is real!

How were you chosen to do this work?

I graduated from Missouri State with a Bachelor of Music Education and I am now the music teacher at Inman Intermediate in Nixa, Missouri. I also run my own business called Blake Richter Productions, which focuses on audio engineering, video production, and photography.

Dr. (Cameron) LaBarr is a huge reason why my production company has been so successful. I started doing recordings for the Choral Studies Program about a year and a half ago and because of that, other choirs have had me record for them.

I have worked alongside Dr. LaBarr for many projects and I’ve also done some recordings for his wife Susan, who is the editor of Walton Music. They have both recorded in my home studio as well.

The day it was announced that the Chorale would be performing at the inauguration, I texted Dr. LaBarr congratulating him and he responded with, “So are you in?” About two weeks later, we sat down for coffee, talked through logistics, and it was official that I was going along to capture all of the behind the scenes footage of the trip.

Do you still know people in the Chorale?

I know about half of the members in Chorale. I graduated in 2015, so some of the juniors and seniors were in Chorale when I was in it. I have also been a counselor for the Missouri State Choral Institute for the past two years, so I know some of the freshmen and sophomores through that experience.

The Chorale performs often. Is there a particular performance that especially stands out from your days singing at Missouri State?

I was a baritone in the Chorale from Aug. 2011-May 2015. During that time, we performed in Germany, Paris, Scotland, England, NYC, North Carolina, South Carolina, Tennessee, Georgia, Illinois, Ohio, St. Louis, Kansas City, and obviously the Springfield area.

In 2014, we performed at St. Paul’s Cathedral in London. That was the last time Dr. Guy Webb conducted the MSU Chorale after teaching at MSU since 1981. That was a very memorable and emotional performance. I don’t think there was a dry eye in the choir or in the audience.

Did you know before the announcement? How did you react to hearing that you could get to go, too?

About a month before the big announcement from Senator Blunt, I received a phone call from Dr. LaBarr. He didn’t give me any information, but he said, “If I had an amazing opportunity for you, would you be able to take off 2-3 days of school?”

I responded with, “Well, it depends on what the opportunity is, but knowing you and how excited you sound right now, it’s probably a pretty great opportunity.” When I heard the announcement, I had a feeling he wanted me to go along.

Sure enough, after I texted him congrats, I found out that I was going to go too! I immediately told my wife, who is also an alum of the Chorale, and we both were so excited! It took a couple of weeks for me to fully grasp the idea of me going along on this historic journey. I still don’t think it has fully hit that I will be experiencing this.

The Chorale will perform a send-off concert on Jan. 14 at the Welcome Center on the Missouri State campus. All are welcome to attend.

Browne, professor emeritus of English at the University of Minnesota, and composer John Wykoff are counting on the music and lyrics to lift “Now We Belong.” The Missouri State University Chorale will debut this original work Jan. 20 at the 58th presidential inauguration.

Dr. Cameron LaBarr, Missouri State director of choral studies, commissioned the pair to write the piece for the Chorale.

Before the election results were in, the Joint Congressional Committee on Inaugural Ceremonies selected the Chorale to perform at the inauguration, an event that more than 40 million people from around the world will watch.

Music and words for millions

Wykoff, assistant professor of music theory and composition at Lee University, said writing music for a diverse audience of millions was a challenging proposition.

“What do they have in common and how do I speak to them?” Wykoff said. “It is all well and good to ‘be yourself’ and ‘speak from the heart,’ but the first rule of oration is to know your audience. And that was, for me, a perplexing part of this work.”

The search for words in this public piece was a tactical rather than a strategic writing process, Browne said.

“The challenge, as I see it, is to write something that has an immediacy, a significant simplicity, but is not banal or thin,” Browne said. “The opportunity is to say something as vividly and wholeheartedly as possible on an occasion which draws the scrutiny of the entire world.”

Give to the Chorale endowment fund

The Chorale will also perform “Now We Belong” at a concert and reception at 6 p.m. Jan. 21 at National Presbyterian Church, 4101 Nebraska Ave. NW, Washington D.C.

This select choir of 50 voices has toured throughout the United States, Europe and South Africa. The group also performs regularly at statewide and national conferences.

“We are honored that the Missouri State University Chorale has been selected to perform at the inauguration,” said Missouri State President Clifton M. Smart III. “This is an extraordinary opportunity for Chorale students to take part in an important and historic event.”

Next Page »
Give to the Chorale Endowment Fund