It’s as much of a cultural phenomenon as it is an athletic event, and Americans get SO. EXCITED. over it.

It’s easy to confuse football with fútbol when you’re talking about it, but when you get to the game you’ll know it’s totally different. We’ll borrow from the National Football League for a brief explanation of the game.

“One 11-man team has possession of the football. It is called the offense and it tries to advance the ball down the field-by running with the ball or throwing it – and score points by crossing the goal line and getting into an area called the end zone.

We’ll let you read more about the way the game is played on their website, because there are A LOT of rules. Basically, you want the Missouri State Bears to have possession of the ball as much as possible and cross the goal line into the end zone as frequently as possible. We highly recommend making an American friend when you go watch who can tell you what’s going on – just look for someone who’s really into the game. They usually know what’s happening. You could also tweet our football team’s coach, Coach Dave Steckel, for American football tips.

What to Expect on Campus on Game Day

The Plaster Student Union Bear (statue) will be wearing clothes.

The PSU Bear is a campus icon who gets involved in all sorts of events, and she loves game days. She wears the number 05 on her football jersey because Missouri State was founded in 1905. If you take a picture with her on game day, make sure you tweet her. She loves the attention from #InternationalBears.

The area between Carrington Hall and Meyer Library will be covered in tents.

This area is called BearFest Village on game days, and is the designated area for campus tailgating. They look funny when they’re empty, but on game days they’re great to gather under and celebrate with other students, staff, faculty, and alumni. And yes, those are portable bathrooms next to Carrington Hall, usually called port-o-potties. We’ll use those during tailgating. 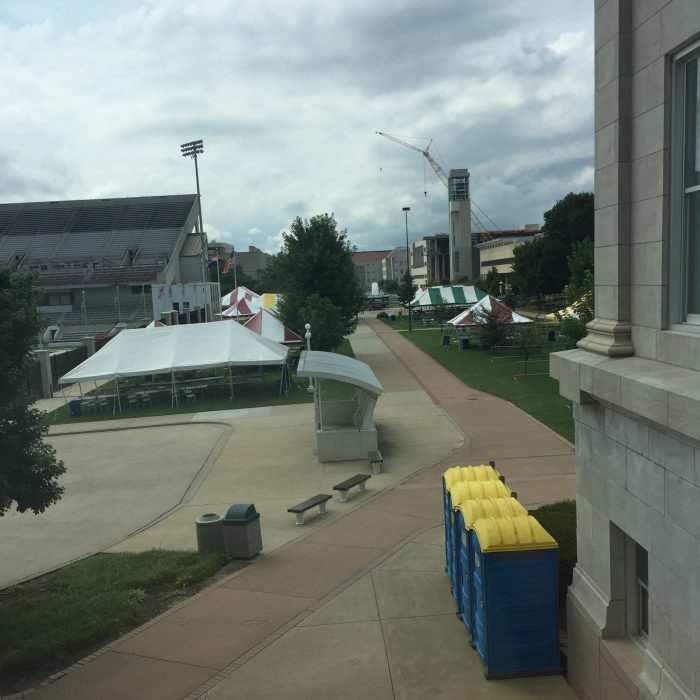 Classes will go on as usual, unless you’re otherwise notified.

Normally Missouri State football games are on Saturdays, so they don’t affect our regular university schedule. The 2016 home opener (first home game) will be held on September 1, which is a Thursday. We’ve heard rumors that a few professors are planning to cancel class, but it will be on a case by case basis. Make sure you’re in class if your professor is still holding it.

Again, most Missouri State football games are on Saturdays, so campus offices are usually closed on game day. For the 2016 home opener, President Clif Smart is encouraging our campus staff and faculty members to attend the pre-game tailgate celebration and game, so offices on campus will be letting most employees leave for the day at 4 p.m. on September 1, 2016. If you have university business, make sure to plan accordingly and try to get in earlier in the day if possible since staffing will be limited after 4 p.m.

According to the internet, tailgate parties began way back during the American Civil War at the Battle of Bull Run in 1861. Onlookers gathered at the battlefield to cheer on their “team” and celebrated with food and drink. Don’t worry – modern tailgating is much more light-hearted and fun. We’re bummed the origins are so grim. At a Missouri State tailgate party in BearFest Village, you can expect a huge crowd, lots of maroon clothing, and all kinds of foods and drinks. We’ll even have a tent to welcome international students and your friends, open to anyone who’s cheering for the Bears. For the September 1, 2016 game, you can find our tent nearest the Carrington Hall shuttle stop, on the northeast corner of the football stadium. Since the game starts at 6 p.m., we’ll be out ready to cheer on the Bears with nachos and drinks starting at 3 p.m. We’d love for you to stop by and see us, but you should also walk around all of BearFest Village to experience all the action.

Our tent is in a great location to see the parade of student athletes and musicians. High five the football players and wish them luck before the game!

BearFest Village is a rare exception to the normal alcohol-free campus policy at Missouri State. Alcohol is allowed at tailgating, but please be responsible and remember that it is illegal in the United States for anyone under the age of 21 to be in possession of alcohol or to have consumed alcohol. If you are over 21, just remember not to bring any glass containers and make sure you carry your ID.