Fatima Zohra Khamissi is a successful international tennis athlete at Missouri State University. Her journey started four years ago when she left her hometown Rabat, Morocco to pursue her dream and become a physician. Currently, she is a senior majoring in Cell and Molecular Biology and minoring in Chemistry. Fatima not only became a Teaching Assistant, but she is also working on research aiming to develop a vaccine to cure HIV in the near future.

Choosing to pursue tennis or education

“If I stayed in Morocco, I would have had to choose between tennis and education, and I did not want to make that choice,” Fatima says. She explains how difficult it is to balance her education and playing tennis back home. She started playing tennis when she was six years old, and to continue in Morocco would have meant putting her academic goals on hold. Fatima looked for programs in the U.S. that could give her the quality of education she wanted and support her athletic passion at the same time.

Choosing Missouri State from over 5,000 universities & colleges in the U.S.

Fatima decided to pursue her dream at Missouri State because she received an athletic scholarship to join the tennis program. She quickly fell in love with her academic program as well and says as a whole, Springfield is a positive, supportive community. As an international student, she never felt out of place. “I never felt I was not home – to me, Springfield and Missouri State is my second home. 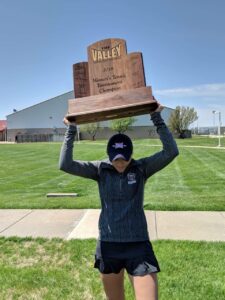 Making the best of opportunities

Fatima does her best not to waste any time in her journey in the U.S. While she was a student-athlete representing the Missouri State tennis team, she also started tutoring math and science in the Bear CLAW (Center of Learning and Writing) in which she tutored students and answered their questions on various topics. She has also engaged in several associations and organizations on campus, including UNICEF and GLaM (Global Leaders & Mentors).

When Fatima first decided to come to the U.S. to study, friends and family told her she would have a good experience. She feels “good” is an understatement, and she would recommend anyone to come to Missouri State.

After showing lots of dedication teaching in the Bear CLAW, Fatima received a rare opportunity to be an Undergraduate Teaching Assistant in the BMS department. She states she has had received undivided support and attention from Missouri State faculty, international advisers, academic advisers and mentors in the past four years, which helped her shape her future and to seek valuable opportunities in such a short time. For the past two years, she has been one of the researchers working under the supervision of Dr. Amy Hulme. The research’s goal is to better understand the uncoating step of HIV and to develop a vaccine to cure HIV. Coming from a society that has suffered from HIV makes this subject very significant to study and research. Fatima still recalls how HIV affected her country, which explains her passion for this research.

“All the resources are here for you to achieve your goals.” – Fatima Zohra Khamissi

Fatima can’t emphasis enough that the people are what make Missouri State such a great place. It is the people that made her experience one of a kind. She says the best advice to international students is to build relationships with their advisers and everybody because that is what will make their experience amazing.