Watthanakorn Kanthakeaw is an ambitious international student improving his language in the English Language Institute. He is from Chiangrai, on the northern side of Thailand. He came to the United States to pursue his dream of teaching children in his home country. Pursuing an English education major and American Sign Language in Missouri State is the first step to achieve his dream. Despite Watthanakorn’s disability, he is without a doubt a great example to plan goals and achieve them with zero-excuses.

Watthanakorn went through many steps to be selected by World Learning, which is a non-profit organization in Washington DC. World Learning is sponsoring him to improve his English language first and then learn more about the sign language. The goal is to support his dream to go back to Thailand and teach children there. Watthanakorn is also planning to earn the TESOL (Teaching English to speakers of other languages) certification for teaching English as a Second Language (ESL).

As an international student in the U.S., Watthanakorn was surprised how diverse MSU campus is. He has met many international students, professors and staff from all over the world. Likewise, he was happy to see that many domestic students from different states meet here in Missouri State. Watthanakorn was fascinated that some students at MSU knew the sign language and were able to communicate with him. Some students had a huge interest to learn, so he took the chance and started teaching them!

Engaging with The Community of Springfield, MO.

Watthanakorn describes the Springfield community somewhat less formal than his home town. As a city, Springfield is a much larger city than his hometown. As for Missouri State, he opined that MSU campus is much larger than normal campuses back home. It is large enough to include a library and several labs whereas campuses are much smaller in Thailand. When Watthanakorn left Thailand, he was added to an honorable deaf group in Springfield and he was able to establish good friendships with them. He was also invited by one of his friends from GLaM (Global Leaders and Mentors) to attend their family Thanksgiving dinner, which was a memorable experience of American traditions.

Everybody Here is Helpful, Help Them Help You!

A piece of advice: “MSU resources are just great, my teachers have been helping me achieve my goals. Learn, study and try to improve yourself” 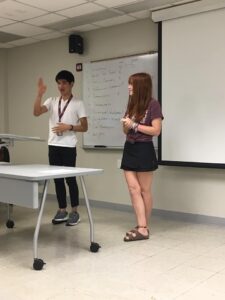 Watthanakorn asserts on his high level of satisfaction for the quality of education he is getting and how much the ELI courses are benefiting him. It has been half a year for him so far and he looks forward to the remaining time of his program, which is one more year. Watthanakorn arrival to the U.S. started with a cultural shock he needed to adapt and adjust his lifestyle for. He states that he could not get through it without the help of the International Sponsored Coordinator in the International Services Office Julia Baer. She has helped him to adjust and get used to the American lifestyle. Watthanakorn meets with Julia every month to make sure everything is on the track and as planned. Julia communicated with the Disability Resource Center and asked them to provide him the needed technology to guarantee his success. Altogether provided greater resources for Watthanakorn such as a Card System to support his understanding of all classes. Moreover, a Live Text To Speech device (TTS), which helps to ease the communication in life in general and in the academic life in specific. Occasionally, Watthanakorn would spend some time with the other sponsored students, which Julia Baer helps connecting. A step by step, he is achieving all goals he has planned supported by the Springfield community and Missouri State’s resources.