Anastasiya Gulak is a Missouri State alumna currently working in Washington, D.C. She became a Bear in the Fall of 2010.

Becoming a Bear after completing high school in Missouri

Anastasiya was born in Zaporizhzhia, Ukraine. She and her family moved to Springfield, Missouri when she was a child. She grew up in a multilingual community and studied English as a Second Language as a kid before graduating from Central High School.

After high school graduation, Anastasiya decided to become a Bear. She enrolled at Missouri State University to pursue a degree in Global Studies.

Finally, a friend from class invited her to attend Cultural Corner. Led by the International Public Affairs Leaders (iPALs) student organization, Cultural Corner connects students every other week to discuss culture. Anastasiya quickly became interested in the iPALs mission, too. They connect international students to the university to build engagement and cultural connections. She decided to get more involved in the program.

“Networking is a key, always work on it.”

In her second year at Missouri State, a mentor advised Anastasiya to build volunteer experience. She took the advice by getting more involved on campus and seeking out opportunities through this involvement.

Her involvement in iPALs led her to an Association of International Students (AIS) meeting. They were planning their annual banquet and show and needed volunteers, so she raised her hand. It was the beginning of a seven-year volunteer opportunity. Anastasiya participated in each AIS banquet from 2011-2018.

She met staff from the Office of International Services through her AIS connections and was soon asked to volunteer in their activities. Anastasiya used her personal experiences to guide students through New International Student Orientation. She also shared her culture year after year at Tour of the Globe and other cultural events on campus.

Academically, Anastasiya helped a Russian professor to teach a Russian course on-campus. Linguistic connections led to her adding a French minor to her degree program, which she completed by studying abroad in France.

All her hard work and campus involvement paid off when she graduated in 2015. She received an offer from World Learning, Inc. to intern in Washington, D.C., citing her volunteering experiences as a key reason for hiring her. 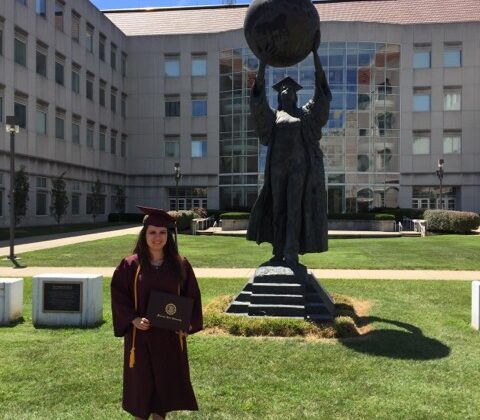 Moving to Washington DC after spending 14 years in Springfield, MO!

After the internship, she decided to pursue a Master of Nonprofit and Civic Leadership. Drury University in Springfield, MO happens to have this graduate program.

One week after graduation, she received an offer to go back to D.C. Though it seemed to have happened quickly, the journey wasn’t easy. She applied to 150 jobs before she took the offer she wanted – meaning she prepared 150 resumes and personalized 150 cover letters.

She started working for American Councils for International Education. This made her build new connections in D.C. She also works on exchange programs that host hundreds of professionals from international post-Soviet Era countries. The program participants come to the U.S. to learn about American democracy and culture. She is happy to use her mother language to help people visiting the U.S.

international Russian-speaking professionals. The program brings students from Asia and Europe to visit the U.S. and learn more about specific topics. She is happy to use her mother language to help people visiting the U.S.

Anastasiya emphasizes the importance of always developing and improving your resume. She met with the director and staff of the Career Center, who helped her improve her resume and cover letters. She also had a Missouri State alumni and organizations in DC take a look at her resume and offer feedback for improvement. Finally, she also worked with Human Resources at World Learning during her internship to make sure her resume fit D.C. standards.

Nothing comes out of the comfort zone

Moving to D.C. was not easy after spending 14 years in Springfield, Missouri building a comfortable life. However, Anastasiya knows she would not be where she is now without her time in Springfield.

She encourages current students to make sure they’re involved on campus. She credits her current success to her academic involvement, volunteer experience, internship, and willingness to seek out resources on and off-campus.

“Being involved on-campus and in your community is an important element in your personal and professional development. Always have goals, small or big, to serve you as guiding stars in your life” - Anastasiya Gulak