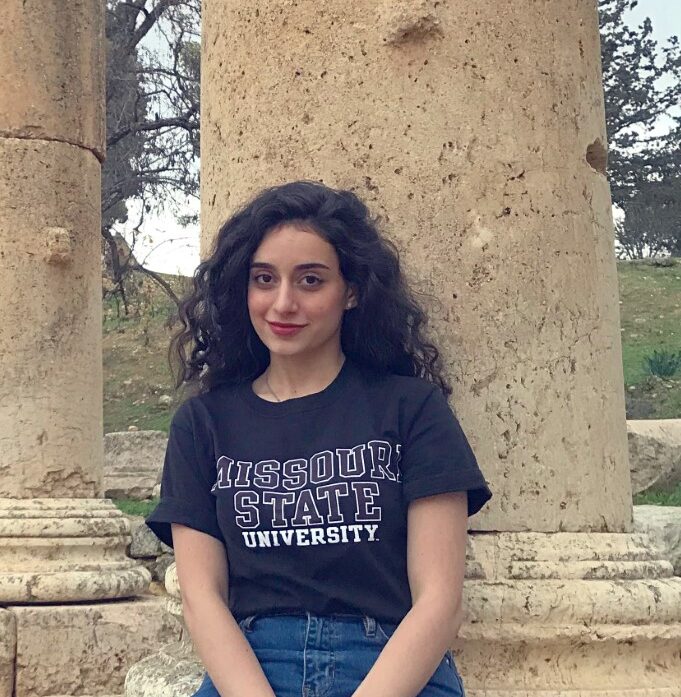 Batool Alzubi grew up in Jordan, along with two brothers and a sister. Batool moved to The United States and started her first year of college at Missouri State in 2015. She explored some different majors before settling on creative writing her sophomore year.

Batool’s father spent a lot of time looking at universities. He wanted his children to study in the United States because he had also studied here, and really liked the quality of schools. He finally found Missouri State, which was everything he was looking for: affordable, had variety in majors, not too big or small, and highly reputable.

When Batool first arrived in the United States, she was pleasantly surprised by the welcoming atmosphere that Missouri State offered international students. Batool commented, “I thought it was really amazing how one of the three pillars of Missouri State was Cultural Competence. It means a lot to me that cultural competence is so important to the university that they made it a top priority.” She also said she felt very welcomed by the students and faculty because they were so helpful and interested in her culture.

Batool had similar struggles domestic students had. She missed her parents and found it hard to be so far away from them. She also said that it was difficult at times to speak English all day, but it did help her fluency immensely. Another challenge she appreciated was getting to know herself because individualism is such a huge part of Western culture. The classroom style was a bit different as well, and she felt more engaged in class because the professors try to get students involved.

Getting Involved on Campus

Batool is actively engaged in MSU. She loves going to events on campus and is a part of a few clubs and organizations. She particularly loves “Bear Breaks,” which is a group on campus that participates in community service immersion trips during fall, spring, and summer breaks. Batool is also the president of the Association of International Students. This club seeks the engagement of both international and domestic students to better educate others on different cultures.

She has accomplished many goals since arriving at Missouri State. She is very proud of her participation in community service and the fulfillment it brings her. Another huge accomplishment was graduation and receiving a Graduate Assistantship. Her favorite achievement, however, is that she now helps others learn English. She states, “If you had told me my freshman year that I would be helping others learn English, I wouldn’t have believed you. I barely knew English myself.”

Batool’s Message to all International Students

“Missouri State is a very diverse school filled with welcoming and open students. They provide lots of resources and funding to help international students achieve their goals and provide countless opportunities to succeed in whatever path you choose. MSU wants all students to share their culture with others and become an active member in the community.”