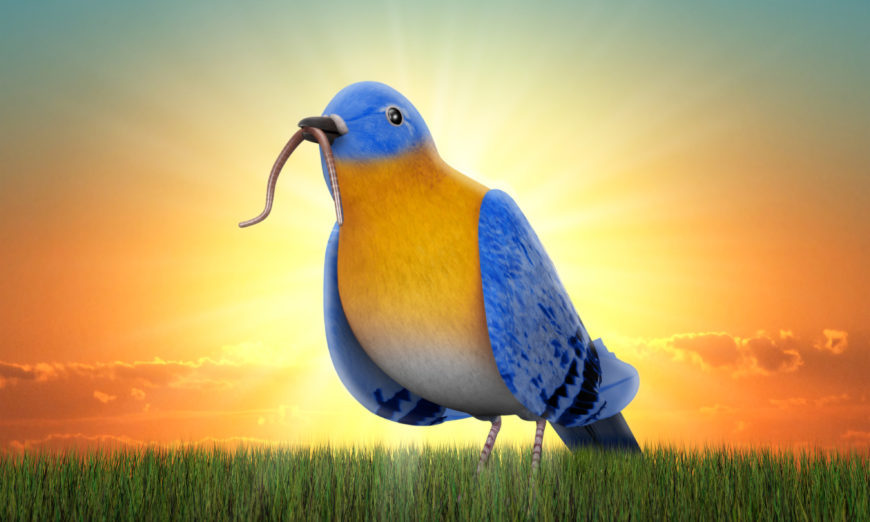 Being first improves the chances of success. The early bird gets the worm is a proverb which emphasizes the importance of starting something early to maximize the potential outcome.

This English expression first appeared in a 1605 book of proverbs by William Camden.

The idea behind the expression is that the birds that wake up the earliest have the best chance of catching a good meal, since no other birds have awoken to pick for worms.

This phrase is so commonly used that it is even shortened to early bird on occasion. Small restaurants and diners will advertise early bird hours or rates to attract those people getting to work early.

Examples of the Early Bird Gets the Worm

1. Here is an example in which two roommates are discussing going shopping on Black Friday.

Mario: Hey Axel, do you want to come with me shopping on Black Friday? That day has the best sales of the whole year.

Axel: I guess I could come. I’ve never gone shopping on that day before. It might be exciting to try something new. What time do you want to go? Sometime in the afternoon?

Mario: Of course you were joking! We have to be there a few hours before the stores open, so we can get a good place in line. There are only a few items each for the biggest deals. If we want to get those, we have to be there first. Remember, the early bird gets the worm!

Axel: Well, that sounds intense! Maybe you should go alone. I’m not sure I can get up that early.

2. An employer uses the idiom during an interview with a potential new employee.

Employer: So, sometimes our employees have to come into work earlier than normal. However, a regular workday starts at 7 a.m.

Employer: And we expect most employees to arrive a little before that so that they can be working at full capacity by the time 7 a.m. arrives.

Employer: You seem surprised, but we strongly believe that the early bird gets the worm. Do you share that opinion?

Interviewee: I do, but I believe I can work just as well, or even better, later in the morning.

1. This excerpt is about a woman who started applying for new jobs as early as she could to have the best chance of getting a new job quickly.

After getting fired, McGlochlin drove her 1995 Buick straight to Smoker Friendly, a tobacco retail store, to apply for another job. As a single mom with little savings and two young girls to support, she couldn’t afford to wait.

“I filled out applications in my car,” McGlochlin said. “The early bird gets the worm, right?” –Denver Post

2. The second excerpt is about people who comb the beach with metal detectors early in the morning, hoping to find valuable items lost in the sand before other people can.

Some treasure hunters rise hours before dawn, arriving at the beach at 3 or 4 a.m. before the beach legally opens. After all, the early bird gets the worm. –OC Register

If you want to learn more about idioms, be the early bird at emailing us at ELI@MissouriState.edu.